8.30 am seemed like the middle of the night after just a few hours’ sleep, but we had a nice Indian breakfast to get us on the way.

We last came to this part of Rajasthan over 25 years ago, and back then the road was a mere dirt track with trucks playing chicken with the oncoming traffic as no one wanted to drive away from the centre of the road and onto the gravelly verge; the trucks vied for space with donkeys, camels and elephants in those days. We still saw some camel carts today, and also large herds of camels, cows and sheep. Along the road was monkeys, nilgai and a few birds hanging around on the telephone lines such as kingfishers, drongo and the beautiful Indian roller. The trucks are much more modern these days, but they still carry the HORN PLEASE signs – some things never change. 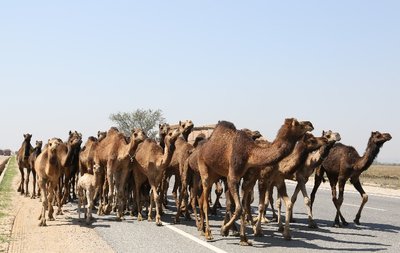 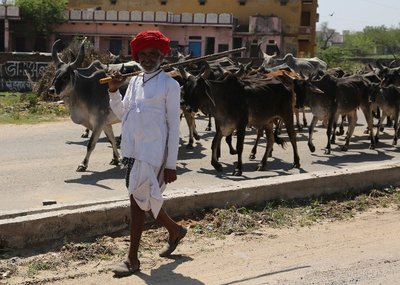 About half way we stopped for a very nice lunch before continuing to Jaipur. I have to admit I slept a great deal of the way after lunch as we haven’t had much sleep in the last couple of nights. 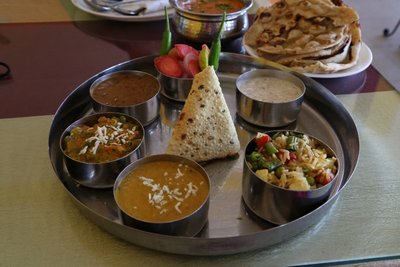 At Amber, we stopped to see the Panna Mena ka Kund Step-well.

I came across details about this step-well quite by accident on line, and thought it would be fun to add to our itinerary as a little side trip on the way from Delhi to Jaipur. 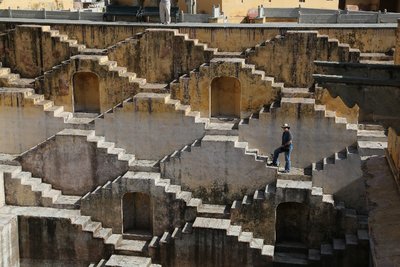 Stepwells are basically deep wells which are reached by a series of steps. They are fairly common in this part of India and often architecturally grand, with designs dating back at least 600 years. This particular one is much younger, having been constructed in the 16th century at the peak of the stepwell construction era. As well as storing water for drinking and irrigation, the stepwell was probably also used for community gatherings as it will remain cool during the hot summer afternoons. Ramps have been built to ensure drinking facilities for cattle but the water is not potable any more.

Steps are arranged in a criss cross pattern on three of the eight-storey sides, and I was told that you cannot use the same stairs to climb up and down. Unsure of how that works in reality, David did climb down, but it didn’t make any sense 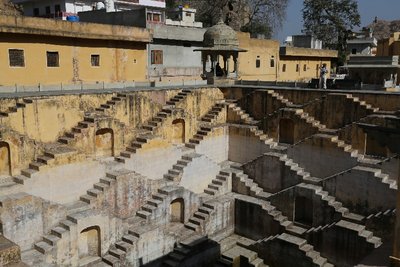 It was lovely in the late afternoon sun with the play of shadow and sun on the steps, with the backdrop of the spectacular Amber Palace.

From there we drove throw the Pink City, past the beautiful Palace of the Winds to Sabu’s place. His house is down a quiet lane, and it is much bigger than I expected it to be, and very luxurious. Or at least it will be by the time it is finished. It is still very much “work in progress”.

Sabu arranged for a tailor to come and take my measurement and then to a cloth shop to get the materials for him to make me an outfit and copy an existing top.

Back to Sabu’s for dinner with some of his American guests from Miami. By the time they had finished doing their financial transactions, it was 10pm by the time we ate. The food - prepared by Sabu's mum - was delicious, especially the rice pudding dessert. 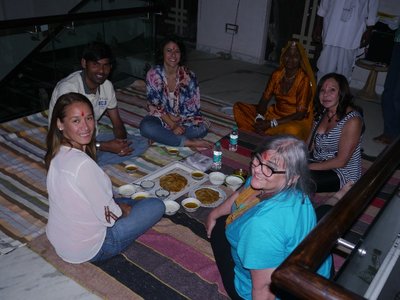 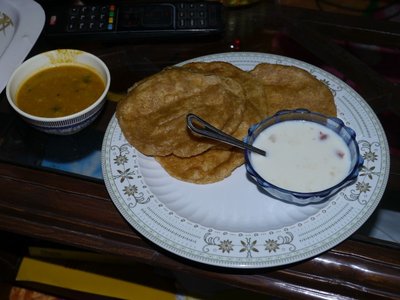 Very cool! American guest from Miami? Where from? Did you tell them you had recently been to see us?
Very cool indeed.

Happy to hear all about your travels. Looking forward to reading more...