As we have already visited the main tourist sites in Jaipur in the past (albeit a long time ago), I wanted to see something different this time round. I think Sabu despairs of our inability to just sit around and chill with his family while we are here, but I want to see and experience as much as possible when I travel. It really is nothing whatsoever to do with him or his family (as I am sure he knows), I just have such a low boredom level and don't “do” chilling.

Jaipur
The largest city and the capital of Rajasthan, Jaipur is also referred to as Pink City and was India's first planned city. The oirigin of the name “Pink City” dates back to 1876 when the whole city was painted pink in honour of a visit by the then Prince of Wales. The name, as well as the colour, has stuck since.

As there are said to be 3500 temples in Jaipur, it was hard to pick just a couple to see today. 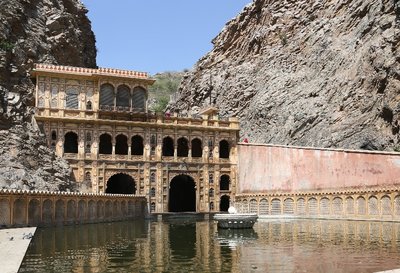 Galtaji has been a retreat for Hindu ascetics since the early 1500s a while the present temple dates from the 18th century. The site consists of 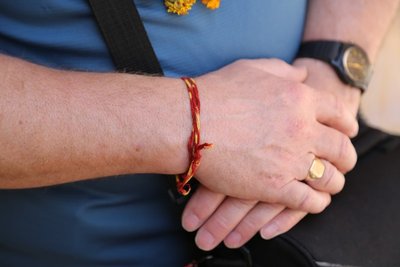 several temples set around a natural spring with the waterfalls that create two tiered pools, the upper and lower pool, used for bathing by pilgrims. The main temple is the Temple of Galtaji, built in pink stone, believed to be named after a saint called Galev who practised mediation here. Inside we were shown the main temple and given a mini puja by the caretaker there, involving a mark on the forehead and some string around the wrist for good luck. All for baksheesh of course. 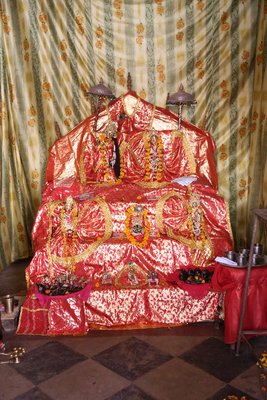 Initially I felt a little cheated that I hadn’t seen any monkeys, but that was soon to change once we reached the first of the pools. The temple is popularly known as the Monkey Temple after the large tribe of rhesus macaques that live here, who were featured in National Geographic Channel's “Rebel Monkeys” series and "Thar Desert - Sacred Sand" episode of Wildest India Series. No wonder these are monkeys with attitude, fame has obviously gone to their head. One of them attacked me to grab the flower garland I had around my neck. 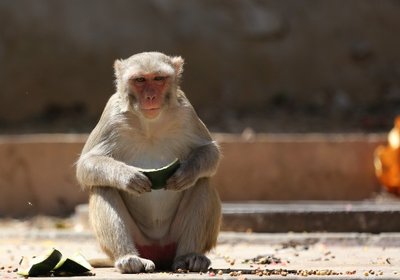 Time for some lunch in a very touristy restaurant. Being a greedy so and so, I ordered way too many dishes from the menu: dum aloo Kashmiri, dal maharani, jeera rice, channa masala, boondi rata, bharwan kulcha and banana lassis. Of course we weren’t able to finish it all, but we had a damn good try. 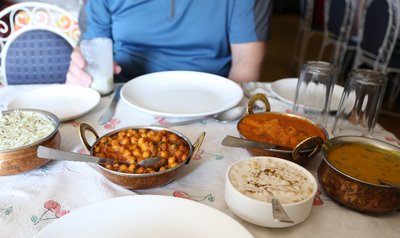 Getting ready for tomorrow, we stopped at the market to buy some colours throw at new found friends for the Holi festival, as well as a water gun! We are ready to partayyyyy!!!!!! 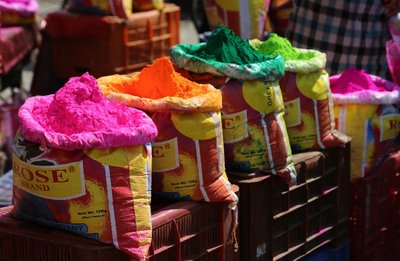 We stopped at the Polo Ground on the way back to Sabu’s to find out about the state of this afternoon’s Holi Festival – last year PETA (People for the Ethical Treatment of Animals ) managed to get the elephant Festival cancelled at the last minute and I knew they'd been fighting for the same this year, but I was hoping they’d carry on with some sort of festival like they did last year. But no. The festival was cancelled by the government with no notice. Shame.

Holika Dahan
As soon as Sabu’s other clients arrived – three girls from US – we set off all together to see the Holika fires.

The night before Holi, bonfires are lit in open spaces and near temples, sometimes with effigies on the top representing Holika. Holika was the evil sister of a demon king who believed he was indestructible and everyone worshipped him as a god. Prahlada, the king's son, however, remained devoted to Vishnu, much to the demon-king's annoyance. After much cruel punishment at the hands of his father, Prahlada was tricked by Holika, his evil aunt,into sitting on a bonfire with her. Holika felt confident this would mean the end of Prahlada, as she was wearing a magic shawl making her immune from the fire. Prahlad, however, chanted the names of God and was saved from the fire. As the fire roared, the shawl flew from Holika and wrapped itself around Prahlada, because she did not know that her powers were only effective if she entered the fire alone. So the evil aunt was the one who perished in the fire, while Prahlada survived. Vishnu immediately appeared and killed the evil king too. This myth has a strong association with the festival of Holi, and even today there is a practice of hurling cow dung into the fire and shouting obscenities at it, as if at Holika. 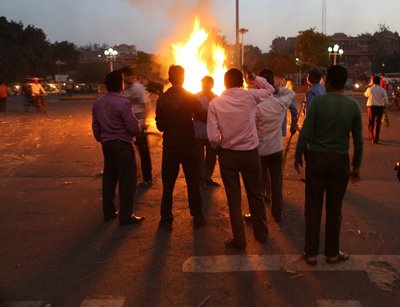 The bonfires we saw tonight were symbolic reminders of the victory of good over evil and the fire which burned Holika and ashes from Holi bonfires are thought to bring good luck. As we drove into town we saw the pyres being prepared and dead on 18:30 they were all lit! All around us were huge fires and people in party mood, exchanging greetings of “happy Holi” with all those around. One particular chap was having a long and involved conversation with me – shame I didn’t understand a word he was saying… I then couldn’t get rid of him. 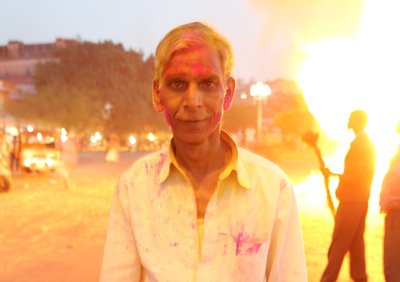 From there we continued to the Birla Temple and fort for a night time view. 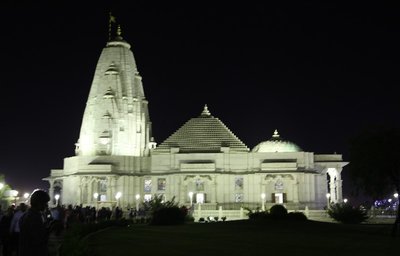 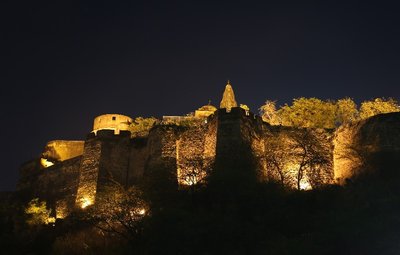 Shri Swaminarayan Mandir
Last time we came to India, we visited the sister temple in Delhi of the same name and were totally blown away, so wanted to see the version here in Jaipur. This is one of a number of temples built by a modern sect of Hinduism known as the Swaminarayan Hinduism, a form of Vaishnavism. 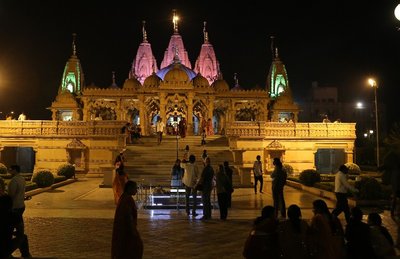 The sect was started by Swaminarayan who lived from 1781 to 1830. In 1792 he began a seven year pilgrimage across India culminating in being initiated into the Uddhav Sampraday sect which he later took over the leadership of. He soon came to be regarded as an incarnation of God by his followers and the sect was renamed Swaminarayan Sampraday. Swaminarayan distributed food and drinking water to the poor, opened almshouses and initiated other social service projects including discouraging female infanticide and sati (widow burning). Swaminarayan was against animal sacrifices and is considered a pioneer of education for women in India.

He had followers not only from Hindu denominations, but also from Islam and Zoroastrianism. He built six temples in his lifetime and appointed 500 paramhansas to spread his philosophy. Now there are hundreds of Swaminarayan temples spread over five continents.

Swaminarayan temples, like other Hindu temples, have walkways around the central shrine so that worshippers can circumambulate the main shrine. The main shrine area is then divided by railings. Despite Swaminarayan fighting for the rights of women, men and women are separated in temples to allow full concentration on god. Men do a specified number of prostrations (as decided by themselves). As well as separate sections for men and women, there is also a small area reserved for ascetics and special guests.

Sabu told us no photos were allowed, but as I didn’t see any notices I just carried on taking pictures. No one stopped me. Just as we were leaving a lady came up to us asked if we wanted to do something (when you have asked “pardon” for the fifth time you just nod and say “yes”) for 51 rupees for the two of us. It sounded like a bargain, whatever it was, so we let ourselves be led down to the basement for what turned out to be a puja. Holy water from a small container was to be poured over a gold statue while reciting a verse, then we had the now-familiar wrist bands attached. As we left we were given a small bottle of holy water and a box of a sweet substance which Tasted like crushed nuts with sugar. We also had to walk at least three times around the idol. 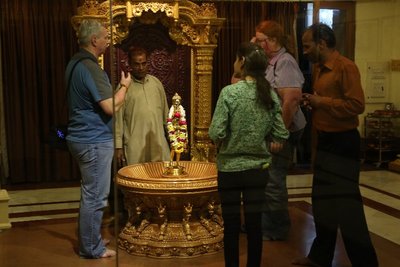 Time to head back to Sabu’s where his mum had prepared dinner for us again.