The most fun I have had with my clothes on for a long time...

Holi
For many years I have wanted to be in India during the Holi Festival so I was pretty excited about that dream coming true this year. The Hindu festival is celebrated every year at the approach of the Vernal Equinox on the full moon and is named after Holika (see yesterday's entry for an explanation of the story of Holika) and is also known as the “Festival of Colour” or the “Festival of Love”. As well as signifying the victory of good over evil, the festival marks the arrival of spring, end of winter. 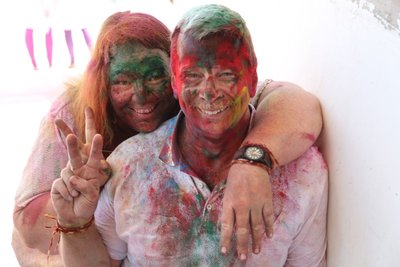 Some families hold religious ceremonies at this time, but for most Holi is more a time for fun, dancing, singing, getting high on bhang and throwing of powder paint and coloured water. The custom of coloured powder and water is affiliated to Krishna, who as a young boy spent much of his time in the company of the young cow-herd girls (called gopis), with his favourite being Radha. One day he questioned his mother about why Radha was so fair and he so dark. His mother suggested he applied colour on Radha's face to see how her complexion would change. This is said to be the beginning of the love legend between the two of them. He was also known to play pranks on the other gopis by throwing coloured powder on them. 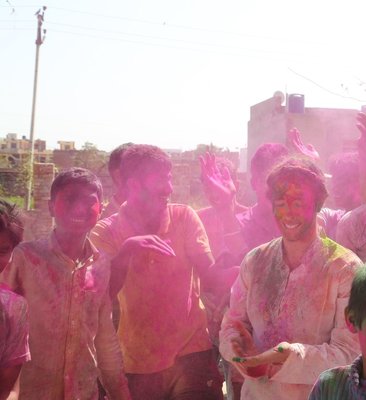 Holi Milan
Holi is a time when people put an end to any hard feelings that might have emerged during the year by hugging each other as friends and covering each other in coloured powder. This tradition is called, 'Holi Milan'. The celebrations are a time of loosening of social restrictions and associated with caste, wealth, sex, and even polite behaviour and social norms. In fact, during the days of Holi, you can get away with almost anything by saying, "don't feel offended, it's Holi”! 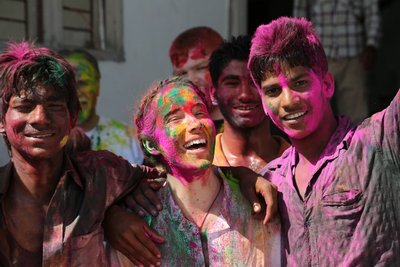 Drinks, specially thandai laced with bhang (marijuana) is also an intrinsic part of the Holi festivity. I had read warnings that as the day goes on, the behaviour of some people can become vulgar and unpleasant, so I figured I'd fit right in! Seriously though, after working for ten years in a nightclub in my youth, I wasn't overly worried about lewd activities and anyway, I figured at my ripe old age I wasn't likely to be the recipient of sexual attraction by young lads and the only improper behaviour I experienced was one young kid grab my boobs. 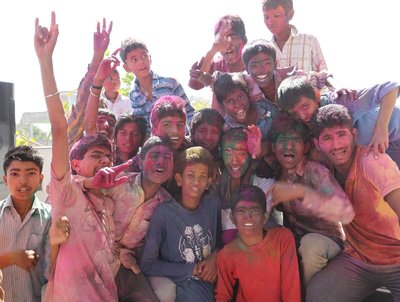 At around 10 o’clock the girls we met last night turned up and the Holi celebrations could begin. Armed with a tray of the various colours, we left the house and headed for the street. A few of the local children had already gathered outside, and word must have soon got round about the crazy foreigners, so more and more people arrived. Before long the crowd must have been 50 strong and we were getting more and more colourful with each “Happy Holi” and each smearing of colour that accompanied it. 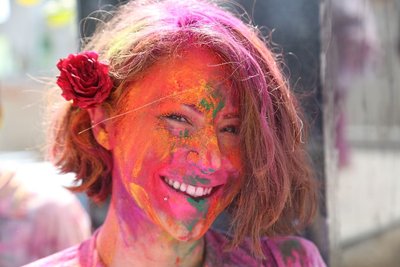 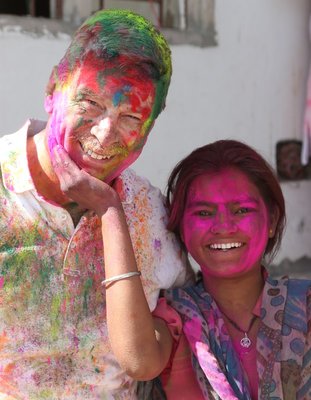 Making of the colours
Originally the colours used during the Holi celebrations were home made from flowers of the flame tree, spread out on the ground to dry then ground to a fine powder called gulal or abeer (meaning the colour of the sky at sunset). These trees also had medicinal properties and Holi colours prepared from them were actually beneficial to the skin. Later, other natural plant-derived colours such as turmeric, marigold, pomegranate, beetroot and hibiscus were used and these organic colours were still not generally harmful. Although most of the colours used these days are commercially produced, I have been reassured that they will wash out! Only time will tell, but as I deliberately wore an old top that can be thrown out if need be, it doesn't really matter. What worries me more is the potentially harmful effect of the toxins in some of the industrial dyes manufactured through chemical processes. 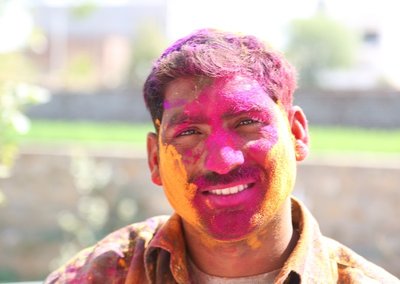 “Just one photo” was a common refrain as each child wanted to be photographed with one of the foreigners, on his own, with his mates….. PC, Sabu’s father’s cousin was a great photographer, picking up everyone’s cameras and taking pictures for us. He atmosphere was already vibrant when the musicians turned up and brought the party to the next level. Everyone was dancing barefoot on the dirt track, with people waving money over our heads for good luck before paying the players.

Sabu’s mum was dressed in one of her most beautiful outfits, and she almost managed to keep it clean.

Later the band moved inside the basement of Sabu’s place, where we continued the dancing, drinking, easing and partying.

In the evening on this day, people traditionally clean up and sober up, then visit with family. The two girls from Chicago were moving on to Agra this afternoon, and they cleaned up well, but the shower didn’t remove anywhere near all of my colourful face “makeup”. I still have a green forehead and eyebrows and my left cheek looks as if someone smacked me hard!

PC was keen to show us off to his friends and family, so before dinner he took us off to his village some 15 minutes away, where we were paraded like homecoming celebrities, going from house to house drinking chai and lassi. With PC in charge of my camera, every moment of this excursion was captured on camera including the moment I scared the young child as well as the buffalo. I hate to think how many photo were taken, but I was captured in front of the house, on the couch, by the wheat field, in the kitchen…… 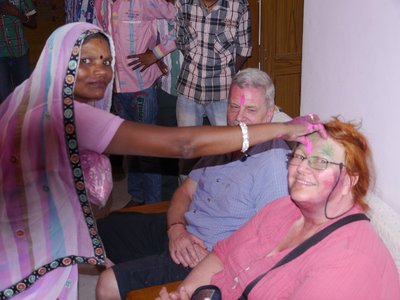 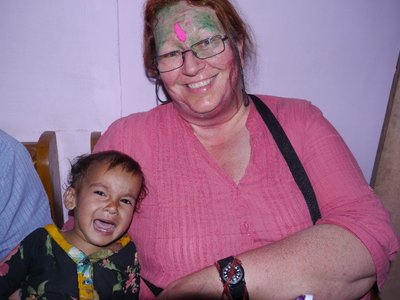 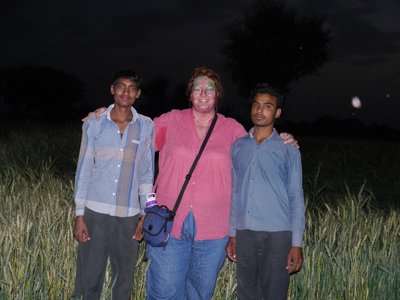 We made it back to Sabu’s in time for the tailor who was due at 18:30 – we arrived at 19:30 which would still be classed as ‘being on time’ India time. All my new clothes fitted beautifully – three tops made using one of my existing ones as a pattern, plus an Indian outfit, all made in two days which included Holi! Not bad!

Two of Sabu’s clients from Toronto, Canada, turned up this evening, and we had a very nice evening with them.

You certainly have been having a great HOLIday.

I wish i can visit holi time. But i cant wait to visit nepal and i booked it on october.:/ Your blog is so awesome!