Keoladeo Ghana National Park
On our first trip to India, back in 1988, we visited this area, and passed quite close by this park on a group tour. We were offered the opportunity to travel through the reserve in a rickshaw, but unfortunately it was voted in favour of returning to the hotel and an afternoon by the pool by a majority of one – meaning that the rest of us had to follow suit. I always said I wanted to come back here and visit the park properly, which is why we are here now. We started early, arriving at the park gates as it opened at 06:30, just in time to catch the sunrise. 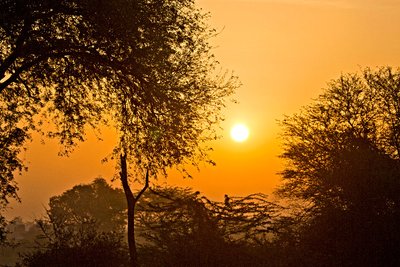 After uhm-ing and ah-ing about whether or not to take a naturalist guide, we decided that for 150 Rupees and hour (ca £1.50), it was probably worth it. Boy are we glad we did, as Rakesh was really worth the money. Although the rickshaw drivers are very knowledgeable about the birds they see, they will only take you along the main road, whereas the guide take you hiking into the jungle in search of more different species as they know the various habitats. 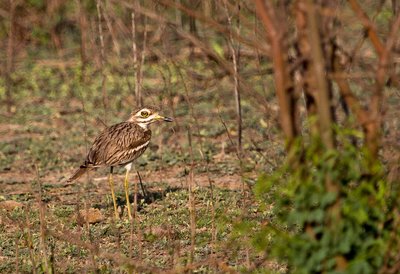 The wetlands are now a protected sanctuary under the protection of UNESCO. As well as being a bird watcher's paradise, the reserve protects Bharatpur from frequent floods - if only our government could do something similar for the Somerset Levels back home!. At the time of the Maharajas, this are was primarily used as a waterfowl hunting ground. 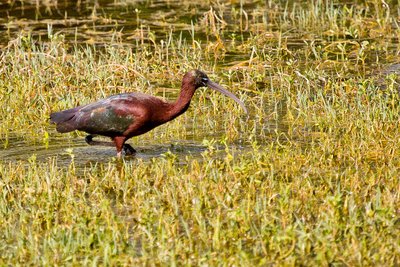 As national parks go, it's not a particularly big reserve at 29km², but the park is a mosaic of wetlands, woodlands and dry grasslands. In addition to the numerous birds, the diverse habitat is also home to 379 species of flora, 50 species of fish, 13 species of snakes (!) 5 species of lizards and 7 species of turtles. We were lucky enough to spot a mongoose, which Prakesh assured us was a very rare sighting. 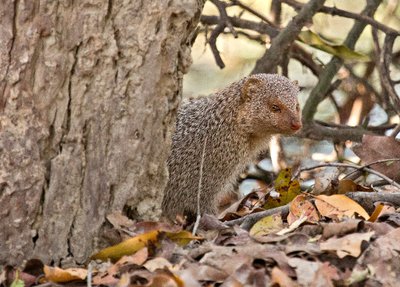 We also saw monkeys, nilgai, chital and squirrels, as well as a couple of turtles. 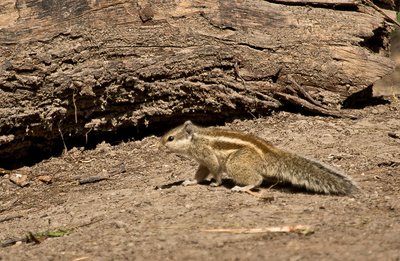 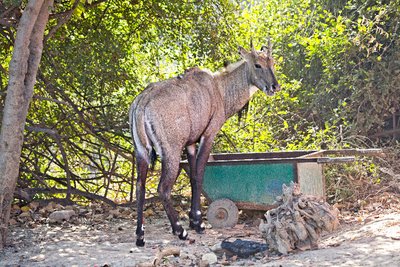 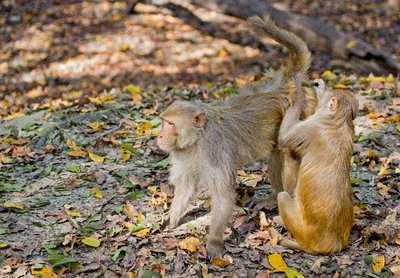 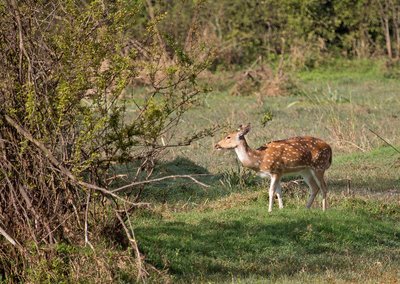 The Origin of the Name
The name "Keoladeo" comes from an ancient Hindu temple in the sanctuary which is devoted to Lord Shiva; while the Hindi term "Ghana" means dense, thick areas of forest cover. 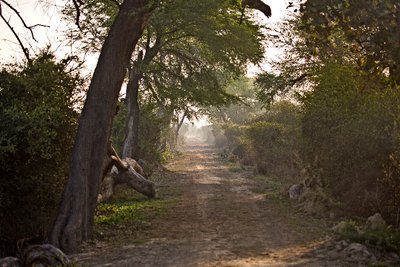 The original plan was to stay out for 2-3 hours, but we ended up taking almost five hours, so we totally missed breakfast at the hotel. We did managed to grab some lunch though, some delicious Malai Kofta. 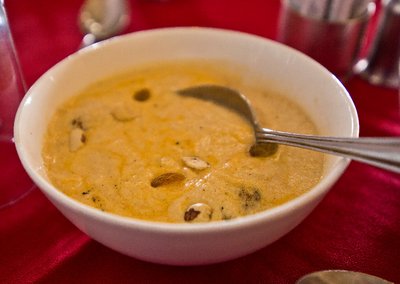 History
The man made and man managed park was created in the mid 17-hundreds when the then Maharaja constructed a dam at the confluence of two rivers, flooding the natural depression transforming it into a shallow wetland ecosystem which became a perfect habitat for an incredible variety of birds. Later the park was used as a hunting ground for the Maharajas of Bharatpur with annual duck shoots in honour of the British Viceroys. It is said that in one shoot alone in 1938, over 4,273 birds were killed by Lord Linlithgow, the then Governor-General of India. A plaque opposite the canteen lists British Viceroys and Indian Generals who came hunting to this park and the number of birds they killed. The last big shoot was held in 1964 but the Maharajah retained shooting rights until 1972. 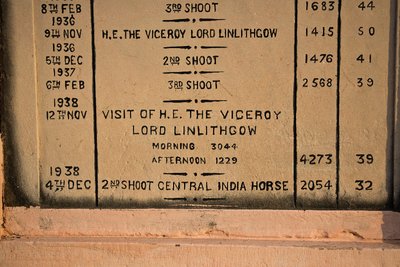 In 1976 the area was designated as a bird sanctuary and in 1982 it was established as a national park, with grazing being banned in the park, leading to violent clashes between local farmers and the government. Police opened fire and eight people were killed, apparently tensions still remain high in the area. The absence of grazing is now actually causing the park management problems as vegetation, mainly a perennial aquatic grass, blocks up the channels. In addition, nutrients deposited as dung by the livestock is believed to have supported a considerable numbers of insects. There are still some 700 feral cattle in the park however. 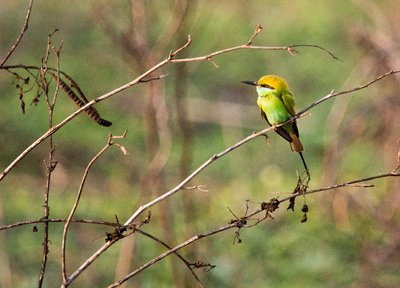 In 1985 UNESCO added Keoladeo to their Heritage list although I had read that the park is in danger of being removed from the list due to severe drought and lack of maintenance. This was not our experience, however, as we saw quite a bit of work going on, creating new paths and even solar powered recharging points for battery operated vehicles which are due to be introduced to the park. At the moment, tourists are taken around the park by rickshaws. 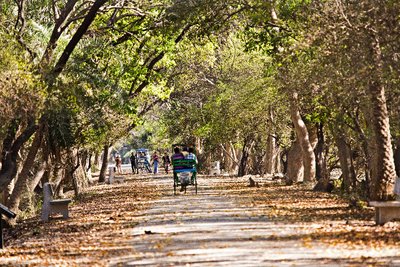 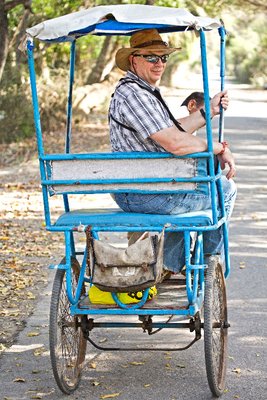 Birds
The park is one of the major wintering areas for large numbers of aquatic birds from Afghanistan, Turkmenistan, China and Siberia. Some 379 species of birds, including the rare Siberian Crane, have been recorded in the park, making it one of the richest bird areas in the world (*the* best according to Sir Peter Scott, and who am I to argue with the great man!). This was the only habitat in the world for the Siberian Crane crane outside Siberia and one of the park's biggest draws for bird watchers – unfortunately the crane has not been seen in Keoladeo recently. There are a number of reasons for this: a) the water from the wetlands being diverted for use by the local farmers; b) hunting in Pakistan during the migration; c) the war in Afghanistan, d) water scarcity affecting the fragile ecosystem. 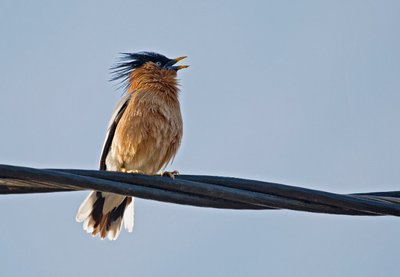 After another four hours of bird watching this afternoon, we got back to the hotel just as the sun had gone down and the palace was bathed in a beautiful light. 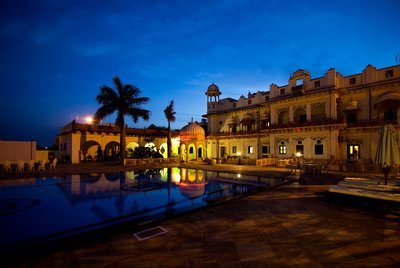 By the time we'd had a shower and changed, it was time for dinner, and no time to write the blog, so I apologise that this entry is a couple of days late. The waiter was really sweet and when I asked him for something spicy, he offered a chicken curry from the 'Specials' menu.

The food came and yes, it was spicy, with my lip tingling as I ate, but I would only say it was a 7-8 on the Grete scale of spiciness. It was very nice all the same. 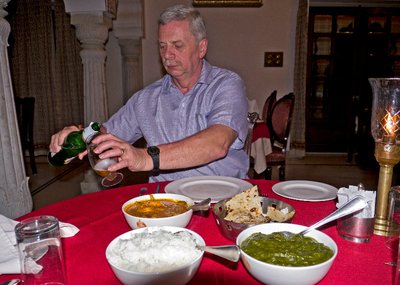