Last night I set the alarm for 4.30am, but find that I am awake from 4 o’clock worrying about not having enough time to get ready. We still have to pack, empty the safety deposit box and settle the bill. The laundry invoice comes to AUS$155 (ca. £67) – we could have bought a complete new wardrobe for that! A 40-seater bus comes to pick us up, and we are the only passengers. The female driver has not been informed about our change of itinerary and takes us to the International Terminal instead of the Domestic. Fortunately we notice when we get there and we have plenty of time to drive on to the correct one. We are able to check the luggage all the way to Port Moresby, but they can only furnish us with seat allocations to Brisbane. The girl on check-in suggests we catch an earlier flight to Brisbane giving us more time for the connection there, which is rather tight at the moment. The train transfer between Domestic and International terminal in Brisbane is very confusing, but quick and efficient once we have worked it all out. Although it was a very good idea to take an earlier flight, it was not really necessary as the flight from Brisbane to Port Moresby is delayed for two hours. We have plenty of time to explore the Duty Free area and end up buying a cuddly toy just so that we can have a pair of sunglasses for Miles. A couple of beers in the bar and a sandwich and it’s time to board the plane. 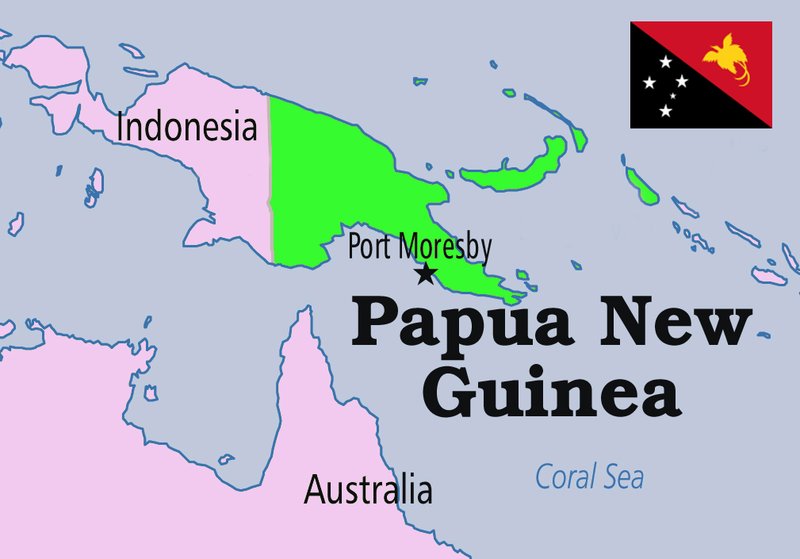 Our entire World trip was built around the visit to Papua New Guinea – it has been on my travel wish-list for a number of years. I cannot explain what the principal attraction is; it merely has a draw to its primitiveness and remote setting. I regard it as the last bastion of tourism and I am intrigued by the various tribes and cultures. I feel so delighted to finally be here. Port Moresby airport is disappointingly modern, a large bill-board advertising the prevention of Aids is the only indication that we are in such an extraordinary location. We are met by Steven and Howard whose names do not match their looks. Although dressed in Western clothes, they are very tribal in looks and up against me appear remarkably short. We drive via a Chemist for some ointment for my ankles. The pharmacist speaks very good English, but has no idea what could have caused such a reaction and plays safe with an anti-inflammatory skin cream.

After checking in to the hotel and re-packing the bare necessities into smaller bags for the flight to the Highlands, we inspect the travel document Steven gave us for the rest of the visit in PNG. The return ticket show the incorrect date and time, but there is no reply from the office telephone number Steven gave us. We also try his home number, only to be told that he is spending the night in the office. We keep trying right throughout the early evening, but to no avail. Dinner is a poolside buffet, but we settle on a choice from the menu. I did not expect great culinary delights in PNG, but the roast loin of pork with a ginger and sweet potato stuffing and crackling is really yummy. We are so glad we didn’t have the buffet as it is mainly fish and doesn’t look especially enticing. The wines are rather dear, all imported from Australia, so we merely have a couple of beers. Back in the room, we continue to try Steven’s office number, but we have no joy until David has the bright idea of double checking the number Steven wrote down against the one in the telephone directory. Steven had transposed two of the numbers, but when we do finally get through, all he says is “we’ll sort it out in the morning”.