I slept like a baby last night – a silly comparison really, considering most babies are awake in the night crying. We miss the hot breakfast this morning as it only starts serving just as we leave at 07:00. Leonie and Helen have decided to accompany us on our trek today. Usually guests arrive at the lodge with a complete package of accommodation and activities, but the girls are on a room only basis. With all the guests coming and going today, Mary-Jane is very grateful that we are happy for the other two to join us, as she would find it difficult to acquire a guide or a vehicle for them to do their own thing.

Peter and Luke come with us, and the bus takes us half way down the track before dropping us off by a small path along the side of the road. We walk through cultivated areas, mostly skirting the villages along the way. Apparently most people are at the market today, hence we don’t see many workers in the fields, just the odd woman tending her pigs and a few small children playing. 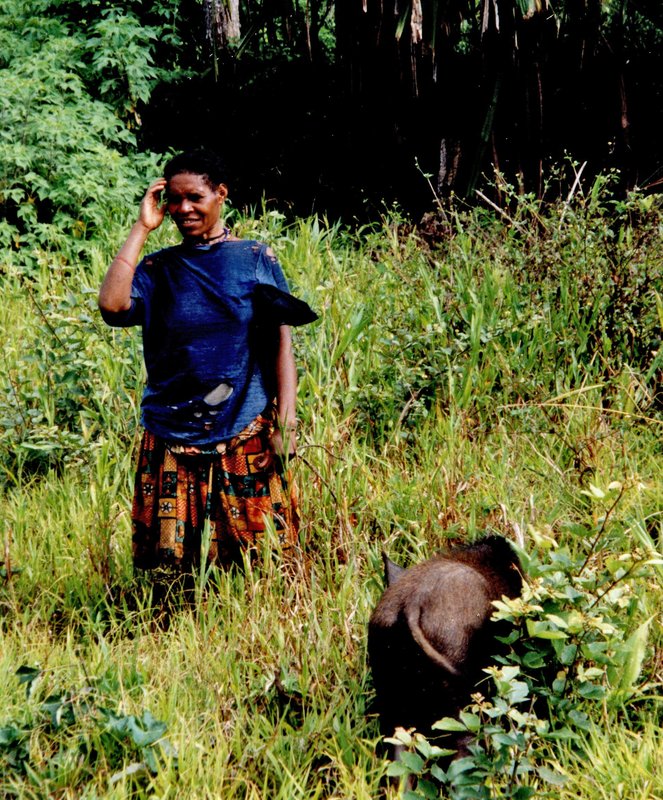 They seem to be as curious about us as we are about them, none of the commercialised “you give me pen” or “bonbon” requests here as are often found in third world countries. I hope it stays that way. I gave up bestowing small gifts to children many years ago for that reason. 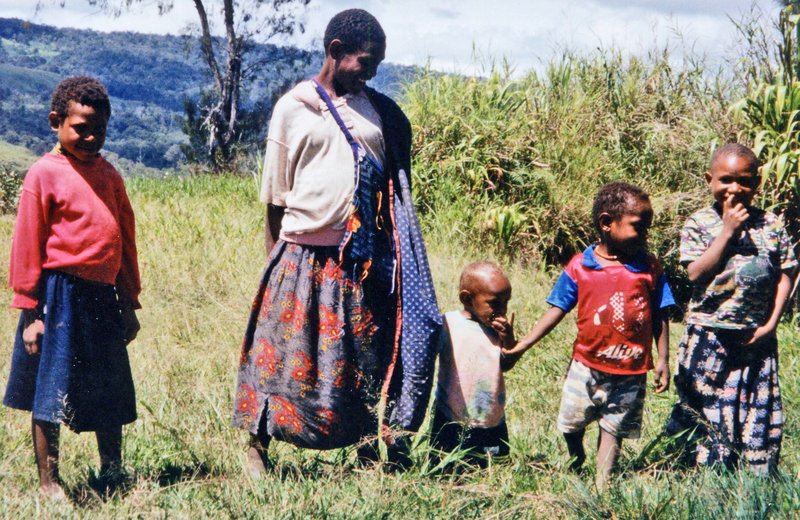 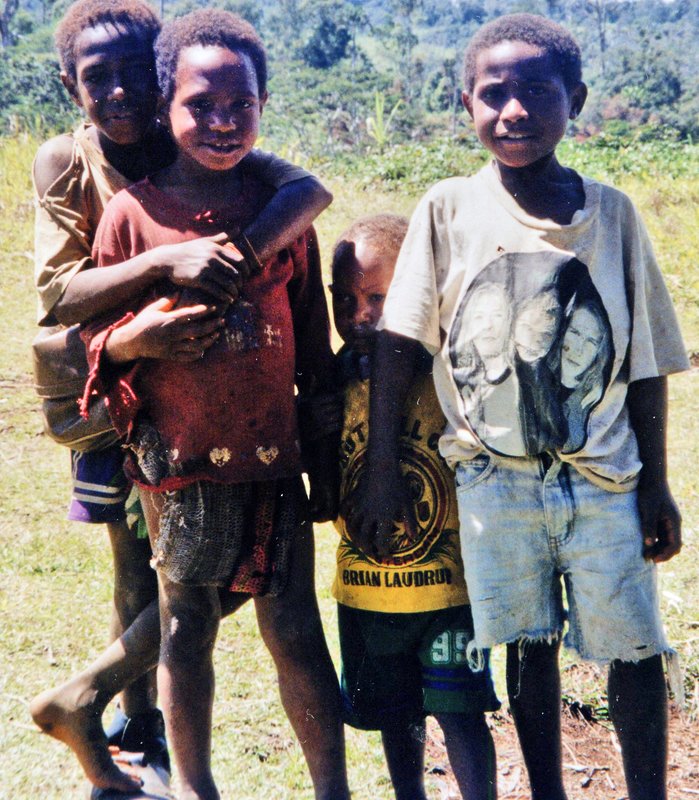 The terrain is mostly flat, but I suffer badly with my chest infection and have to stop at regular intervals to catch my breath. In places the tracks are muddy, and there are many slippery log bridges to cross. Some of them are easier than others, with two or three wider logs side by side. A couple even have cross bars on them. 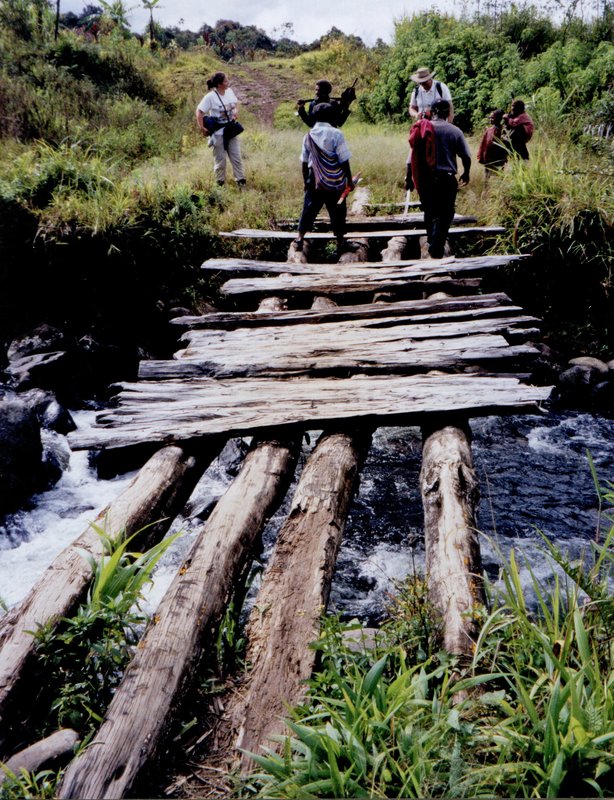 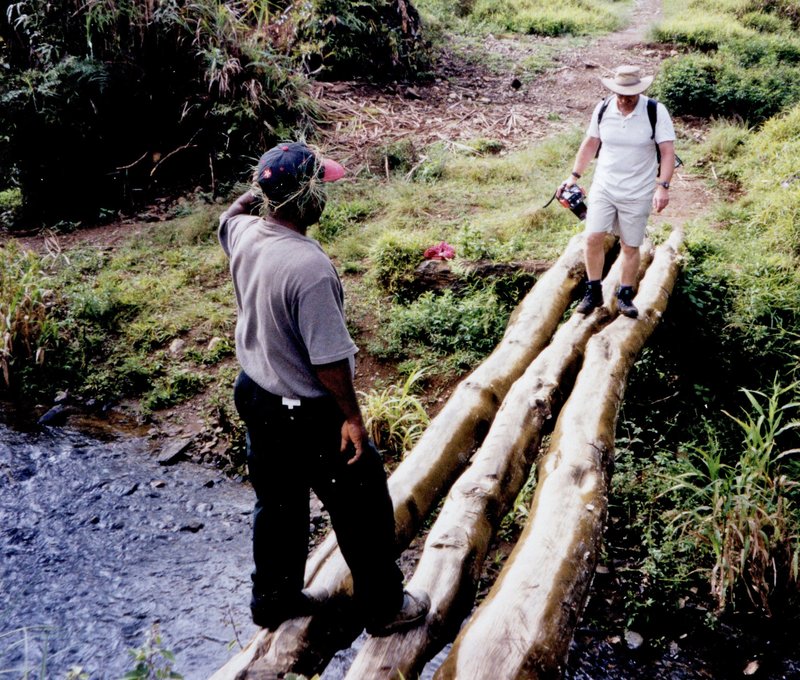 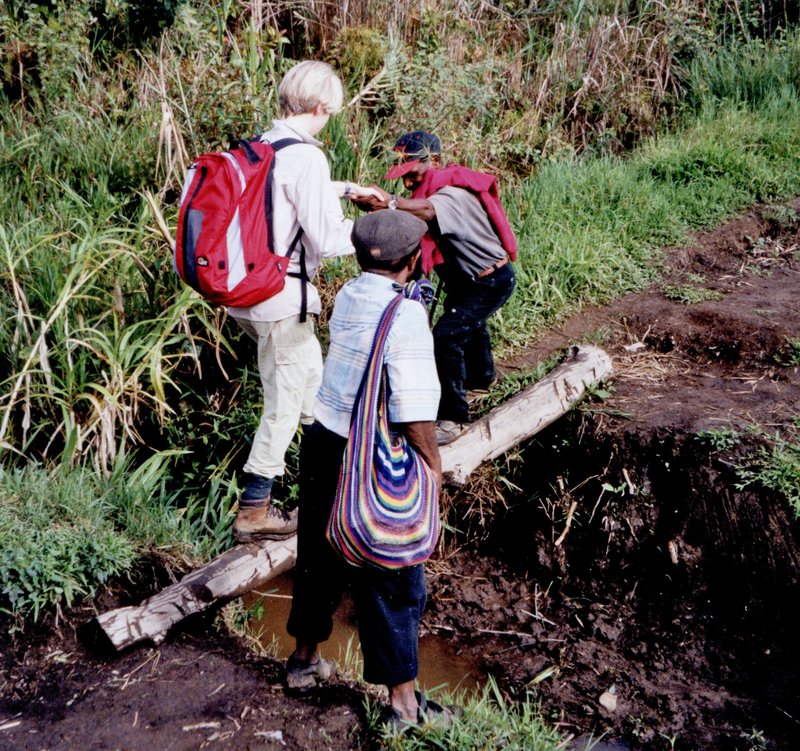 The guides are very thoughtful and caring when helping us across, but I do give up on one particularly precarious bridge consisting of just one, thin log at a 45° angle. I feel sure that it would not hold my weight, and decide to slide down the very steep and muddy bank on my bottom and wade across the stream. Others do the same. Little children run barefoot over the logs as if there is nothing to it. I do believe that it is easier barefoot than with clumsy walking boots, as the foot would mould itself around the log giving a better grip. I won’t try it though. My mud-slide causes great hilarity amongst the locals – I’m only too pleased to amuse the residents. The only wildlife we spot on our hike is a Brahmany Kite soaring above. What a beauty he is too.

Check out the crossings in this short video clip:

The village we walk through is almost deserted, but we are free to wander around having a look. The men’s hut is dark and smoky; it must be very crowded and uncomfortable with ten people sleeping in there. The huts have no chimneys, but the fire is left burning all day and the smoke just filters through the straw. The women’s hut is cleaner and has that typical feminine touch with little decorations and knick-knacks. 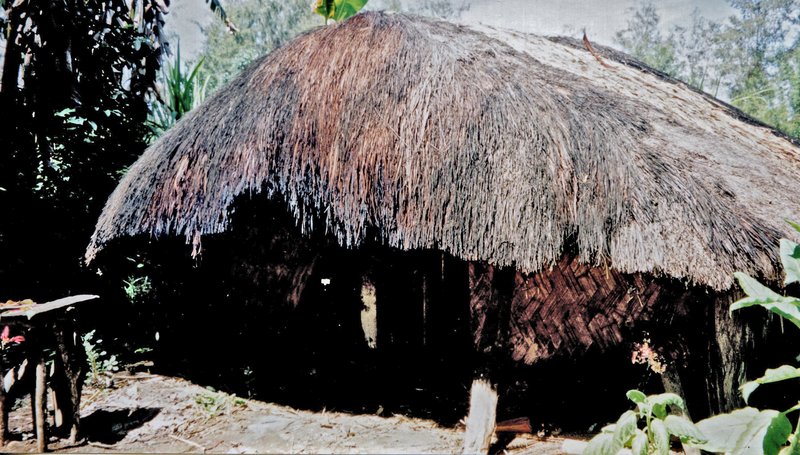 I consider this to be good time to answer the call of nature, and I am shown to the village loo. They certainly don’t believe in modesty: the 4” hole in the ground is located on the top of a mound, the highest point in the village, with very little foliage to shield your private moments. Unlike The Gambia, where the entire village came running to watch the white lady drop her knickers, I am pleased to find that the two people within sight, sound and smell of my deed are thoughtful enough to reposition themselves on the other side of the nearest hut. With such a small depository and uneven ground on which to balance on my haunches, a good aim helps. This is not the best instance to suffer from the runs, but timing was never my stomach’s strong point.

Between the village and the main road are many graves of men fallen in clan warfare. Those who die at the hands of the enemy and people who lose their lives in car accidents are given a posthumous hero status. With the speed kept so extraordinarily slow on these rutted ‘highways’, it really would be very bad luck indeed to be knocked down by a moving vehicle. Tribal disputes however, are still very much the norm here in Papua New Guinea, and many young men die that way. 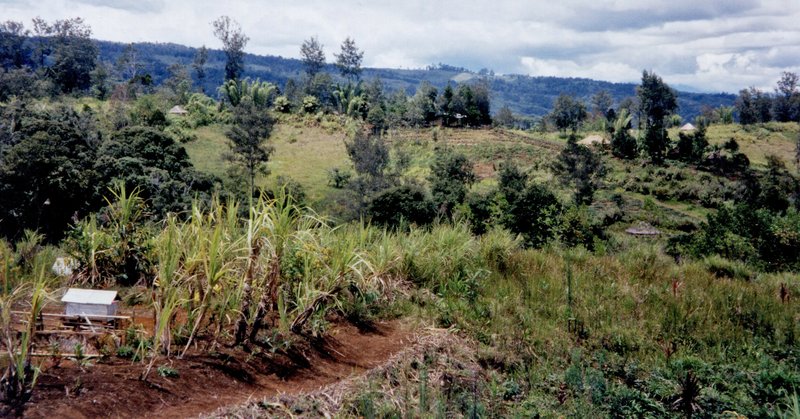 In another village we come across an inviting gazebo with benches suitable for eating the picnic Luke has been carrying for us. What a spread: boiled eggs, sandwiches, cakes, bananas and lemon squash.

A villager proudly shows off some photographs he has had taken with tourists, making me realise that most of the things we take for granted at home, they probably haven’t even heard of here. There is no post office in town and no bank – that closed a couple of years ago after being robbed too often. Highwaymen are common, so local companies have the wages flown in each week rather than risking hold-ups on the road. Most people are subsistence farmers, and goods are bartered in the local markets.

Near the market we see the one and only shop for many miles, but there are few commodities on sale. Home made cigarettes rolled in newspapers are traded on the ground in the shade outside. Peter plays darts with a few other men, and wins a can of Coke. The main attraction here at the market today is us. Wherever we walk we have our own entourage of giggling children and inquisitive adults. They are all happy, even proud, to be photographed, and do not expect a payment in return. We do not feel threatened in any way, and I am pleased to say that everybody I have encountered so far has been very friendly. A few of the people here are dressed in the customary straw skirts, but I can see no nose rings or painted faces. 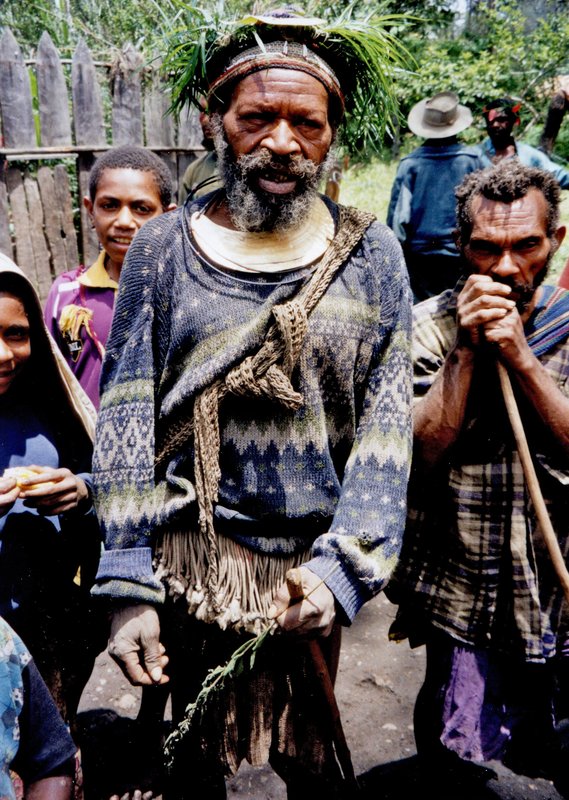 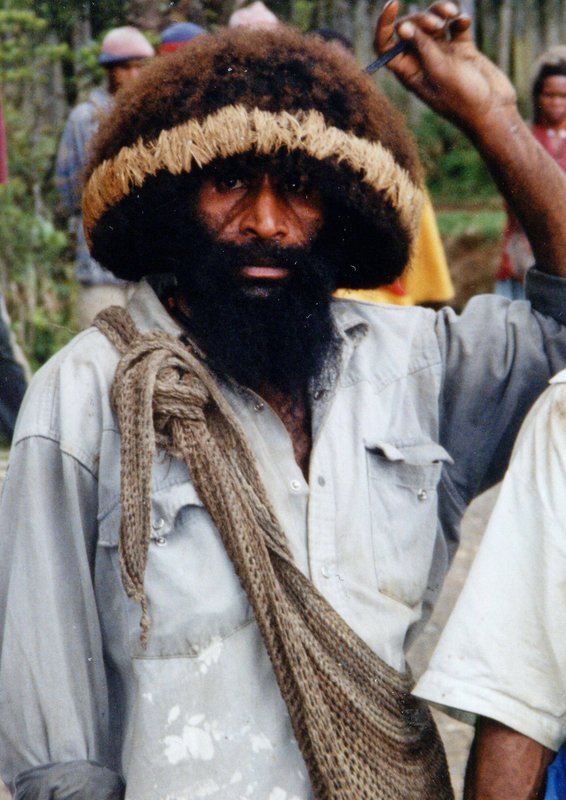 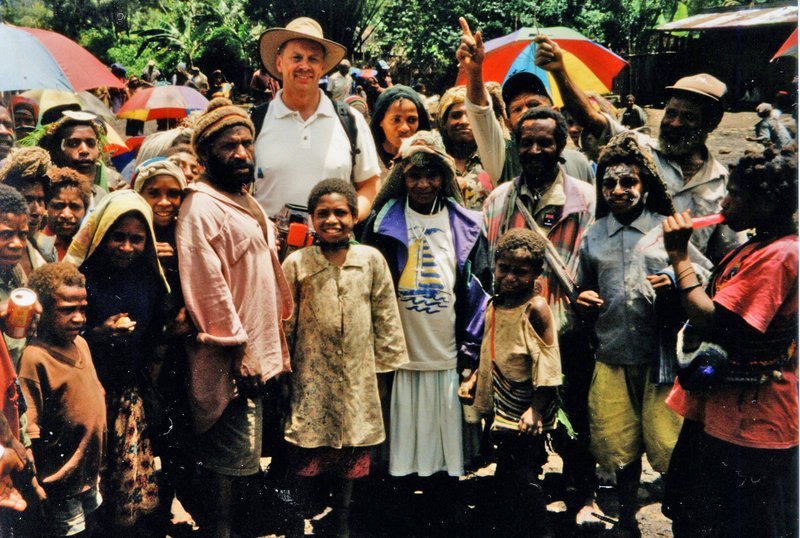 One jolly old man has his face painted like a clown with red cheeks and nose. He also wears a lot of feathers, and loves being photographed with Miles. The children do not understand that Miles is a toy; they have obviously never seen a teddy bear before. Wonder what they play with? 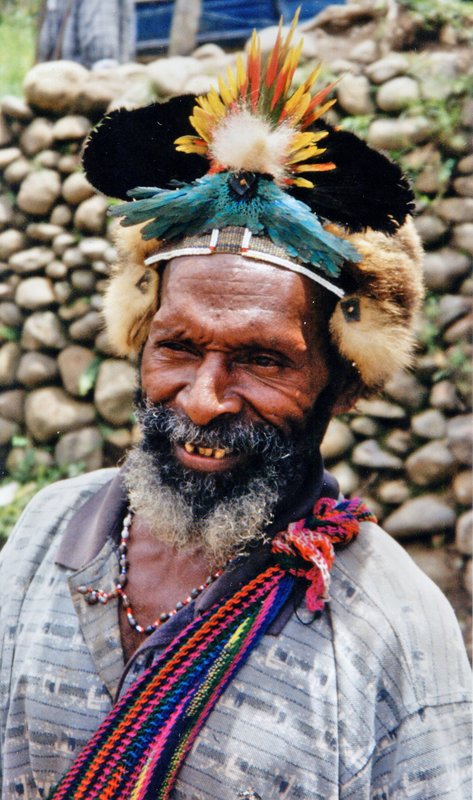 Peter has radioed for the bus to arrive to pick us up again and while we wait David shows the video to the children. They find it irresistible to see themselves on the moving screen and much merriment and jumping up and down waving hands ensues.

The bus arrives late due to a flat tyre; meanwhile the lodge has sent another one down to meet us. We also meet up with the bus carrying the Americans, and we travel in a convoy back to the lodge. There is much consternation in the bus when a fracas is spotted ahead. A man from Medang, driving a hire car has been robbed at knife-point. Unfortunately he fought with the robber and ended up badly injured. The locals love a drama and are revelling in this tale. The 'rascal' (as highway robbers are known here) has driven off in the hire car, and we make a road block with the three buses to try to catch him. Peter holds his machete tight and admits that “we are very scared”. Luckily (for us) the local inhabitants trap the gangster first, tie him to the bumper of the car and beat him senseless. They are now waiting to hand him over to the police, who will probably batter him further.

We gingerly move on, willing the throng of people to disperse so that we can get through. Peter is still scared and keeps sounding his horn to break up the crowd. Once out of the area, the excitement dies down and the mood in the bus lightens. Peter even feels comfortable enough to stop at another market further down the lane, where we take a walk amongst the fruit and vegetables on sale. There are no stalls or tables, just wares spread out on mats on the ground.

At the arrival of a white jeep all the youngsters scarper in every direction, and I must admit it alarms me somewhat. Should I run too? As I look around like a startled rabbit, I am reassured that all is OK. The children believed it to be the police, of whom they are very scared. It wasn’t the police, and the market place returns to normal. Everybody here carries umbrellas and we soon realise why as we are caught in a torrential downpour. Such incredibly loud thunder and lightening complements the atmosphere following the two unsettling recent incidents. 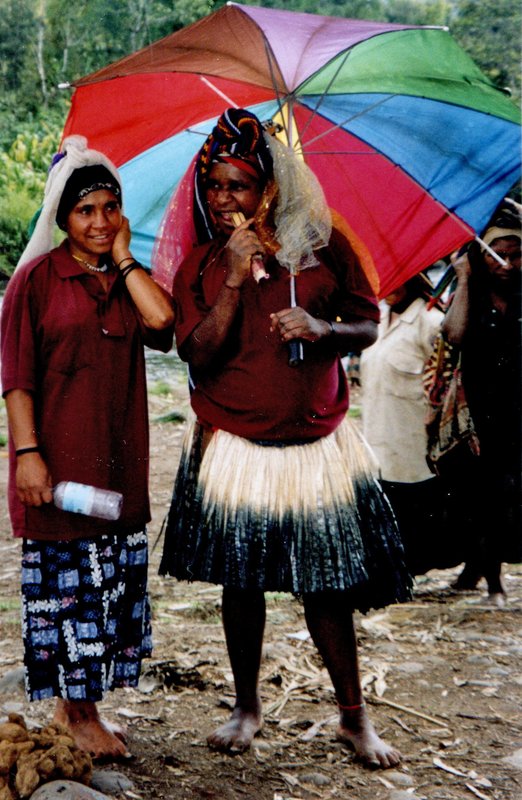 We spend the rest of the afternoon lazing in the spa with Leonie and Helen, surrounded by verdant vegetation and protected from the continuing rain by a straw roof, the thunder sounding awfully loud and very near. What a perfect place this is. 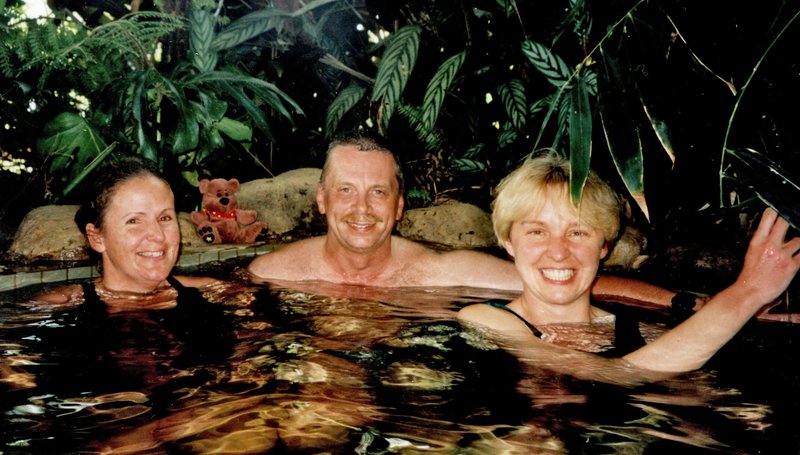 Later we join the other guests for pre-dinner drinks in the bar, with some tasty snacks of home made sweet potato crisps. There are two very different groups of Americans here now, one 'stereotypical' group of loud-mouthed, complaining spoiled brats, and one group of ‘normal’ people. Most people arrived on a charter plane on the new air field, I wonder if they realised they were the inaugural passengers on this rather challenging up-hill landing strip? At dinner we are given a different table for the four of us, while the Americans are cramped 10 to a table. What a shame. While visiting the market today, our driver bought some watercress, which the cook has now transformed into a delicious soup. Main course is a buffet of chicken curry, roast lamb, rice, vegetables and salad, all very nice.