After a restless night through coughing, we get up rather early and leave the lodge at 06:00 for a waterfall walk with Peter. The first part of the walk, as usual, is up the dreadfully steep drive way to the main road and further up the highway before turning off into the rainforest. I have a bad cough and my chest feels especially tight today, so I give up half way down to the waterfall. My reasoning is ‘what goes down must come up’! David carries on with Helen, Leone and the guide.

This is what I missed apparently: 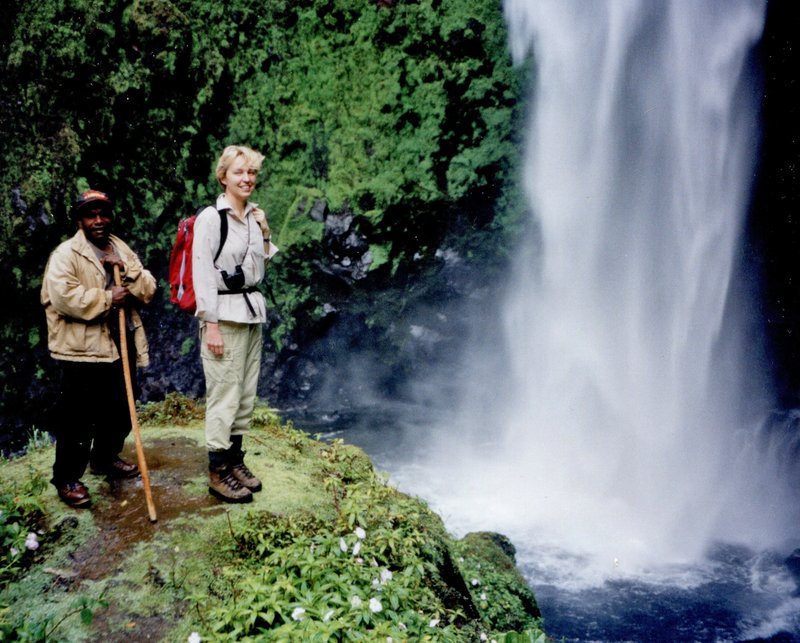 What the guide fails to tell me at the time, is that from the waterfall the path back to the lodge is almost flat, as we'd already climbed to the highest point before descending. In other words, they don't go back up the way we came and I ended up climbing the hill unnecessarily! Doh!

I take my time on the way back, stopping along the path to enjoy this feeling of serenity. I am all alone in a great expanse of ancient virgin rainforest. Just me, the trees and the sound of the birds. What a wonderful liberating feeling, a really humbling experience. The peace and tranquillity around me is interrupted by a nearby rumble which is somewhat disquieting until I realise it is my stomach. I join the road again and meet a couple of locals with the greeting ‘Monin’. At the lodge gates, a bilum (string bag) seller joins me, or rather, follows me, all down the track to the hotel. He doesn’t speak to me and persistently walks three steps behind. It is very unnerving and I tell myself that ‘if he was going to attack me, he would have done so as soon as we got round the first bend, out of sight of the road and the lodge.’ It doesn’t really convince me that he is harmless, but I get less and less nervous the nearer I get to the reception. In the car park he joins the lodge workers who are having a fag break and I breathe a sigh of relief as I enter the bar. I feel rather silly now, as he was a hotel worker not some random robber!

The rumble in my stomach has become more urgent, but as David still has the key to the room, I have to get Mike to accompany me down to the chalet. Just in time! I pop a few Immodiums and hope for the best.

We have time for a delicious breakfast of scrambled eggs and scrumptiously crispy bacon before having to share a bus with the Americans to the starting point for today’s walk. Do all Americans have to be spoon fed? These certainly seem to be unable to think for themselves and their questions make me cringe.

Today’s walk is different from yesterday’s ramble. Now we are walking in deep war trenches indicating the demarcation between the various clans’ territories. Here and there are war graves, some very recent. I do hope we don’t get caught in the middle of one! 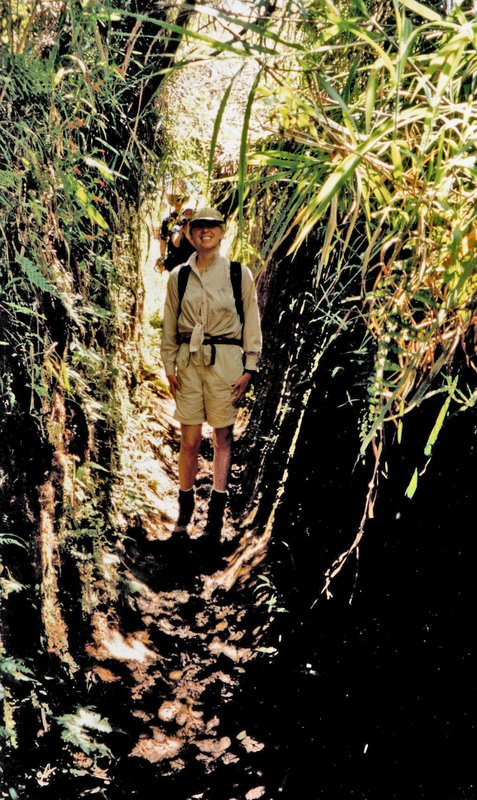 Where there are no trenches, we amble along paths on meadows, through thick grass taller than us or giant bamboo. There is not much to see initially, but after a while we get out on more open land with wonderful views out over the valley. When Mary-Jane planned this walk with Harold (the guest relations officer), she took into consideration my bad chest and most of the walking is down-hill. 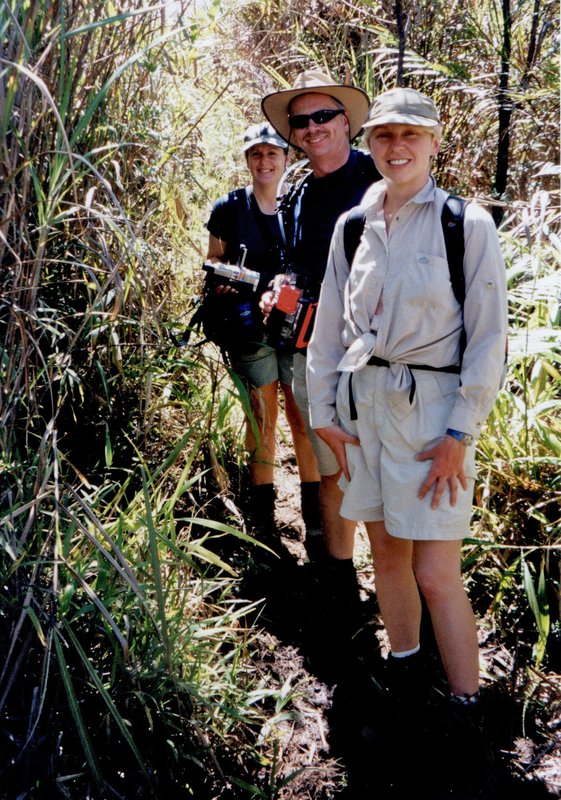 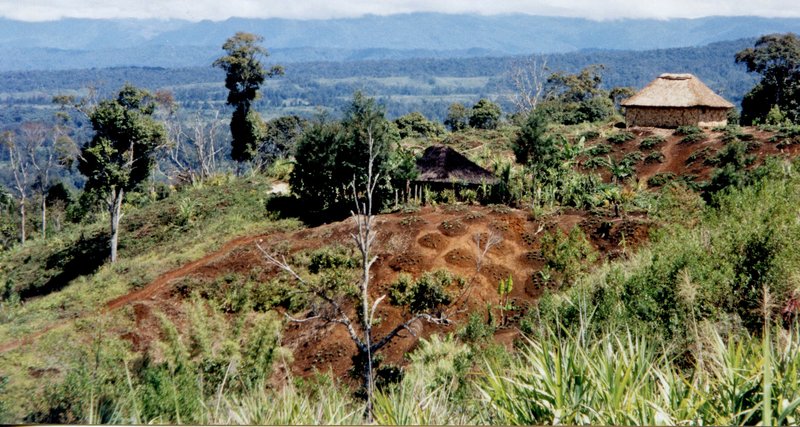 The jungle is quite thick in places, but Mark tells us that not so long ago, this area was home to many villages that were burnt down during the clan wars. We stop for a while in a village, resting in the shade of a tree. The terrain becomes more challenging; this is sheer jungle with undulating land, streams to cross and very muddy paths. Erewan cuts a stick for me, which boosts my confidence no end. 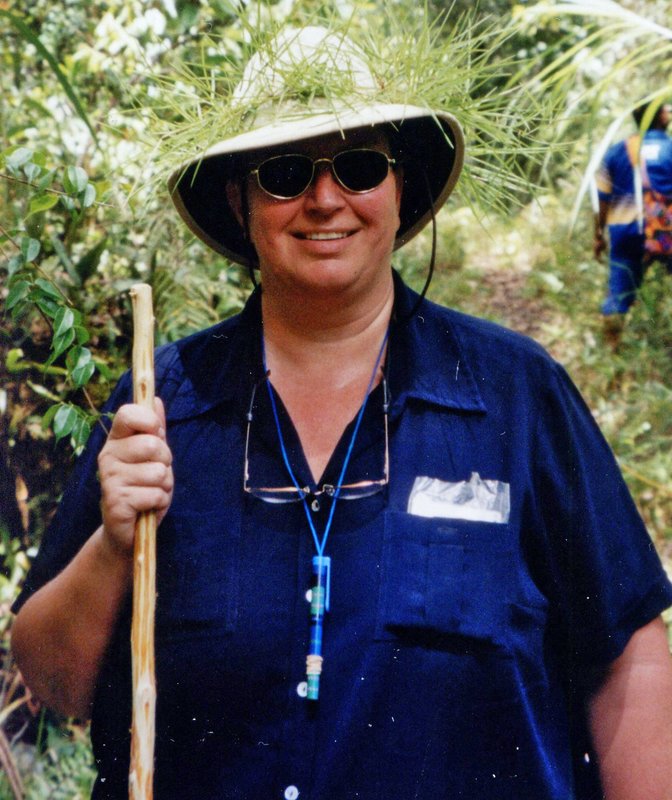 It isn’t me who falls, however; David takes two tumbles, once landing on his video camera. The camera is well protected by the waterproof housing and suffers no damage. There haven’t been too many log bridges to cross today, but the one we do encounter is particularly treacherous. It consists of just one thin log at an angle, a large expanse to traverse and a fair drop below. From nowhere a small child produces an extra log for our comfort, and his little hands help haul me up the incline.

As we near Mark’s village, he tells us about his two wives, one of whom works at the lodge; the other stays at home with the children. Rain stops play during our picnic, and we rush to shelter in Mark’s house. 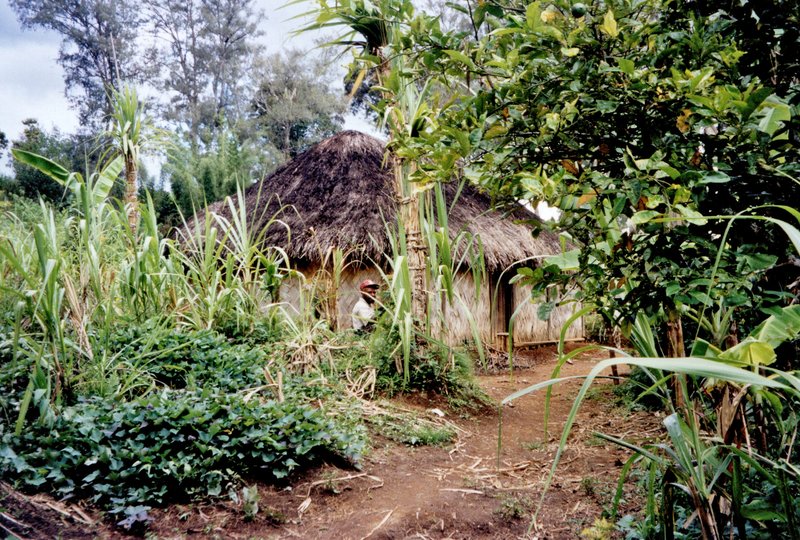 The door is low and the inside is dark and dingy. In the middle of the room the fire is burning fiercely, as before there is no chimney and the room is thick with smoke. I cannot help my persistent cough; I am embarrassed about my obvious discomfort from their hospitality. They notice my predicament and remove some logs from the fire, reducing the smoke considerably. 15 of us are crammed in to the small hut, all on benches around the walls, each one equally inquisitive about the others. The children sit there wide eyed and tongue tied, staring at the strange visitors in their midst. 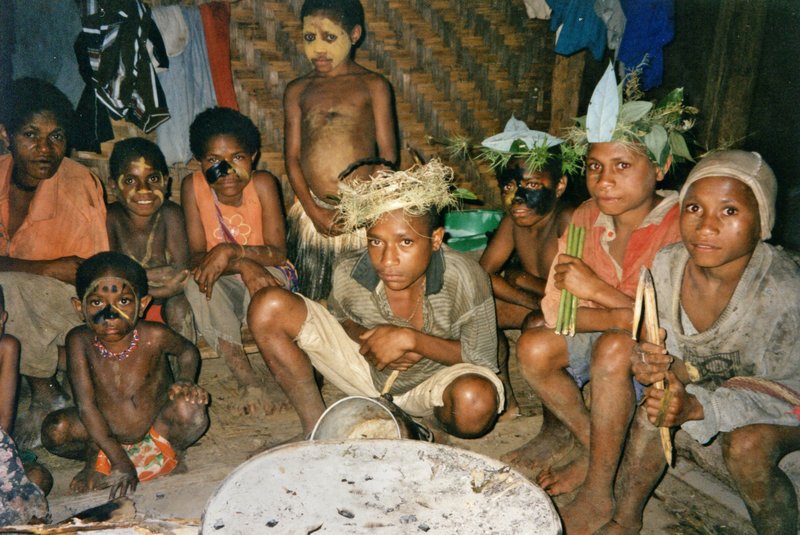 This is mostly Mark’s family and he laughingly tells us that the children will be the stars of the village for days on end after having had white men in their hut. It is such a magic moment that I will remember forever. The room is spartan, but by their standards, very up-market. Mark is a rich man, gauged by the fact that he has a separate building for his pigs, rather than them all living in with the family. Three small rooms are screened off behind the benches and act as the adults’ bedrooms. Mark is also a very modern man, preferring to live with his wives instead of sharing the men’s hut. 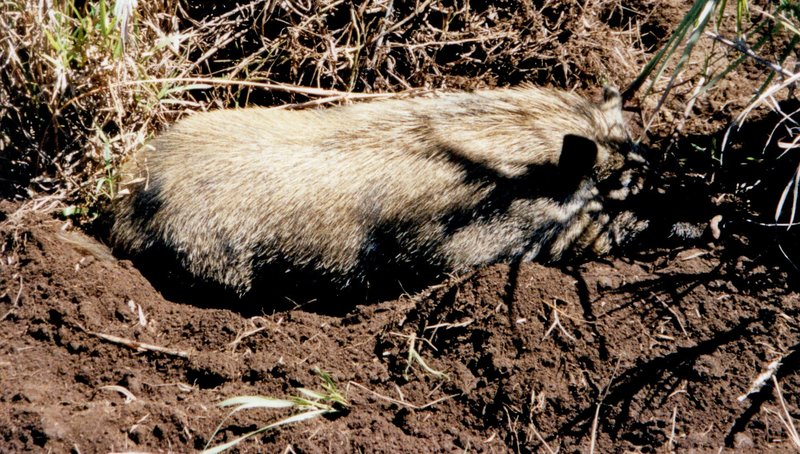 Pigs are highly thought of in this society

At the village Mark takes us to visit the ‘widows’, young women whose husbands have been killed during clan warfare. For six months after their bereavement they live together for support, and then it’s time to look for a new husband. The family pay a lesser dowry for them the second time round, as they are now ‘second-hand’. Widows are fairly sought-after in the Huli society and they should have no trouble finding a new partner. The girls, who are both very young and carrying a small child in their arms, are wearing straw skirts, a scarf covering their heads and a top made from a loosely crocheted material. 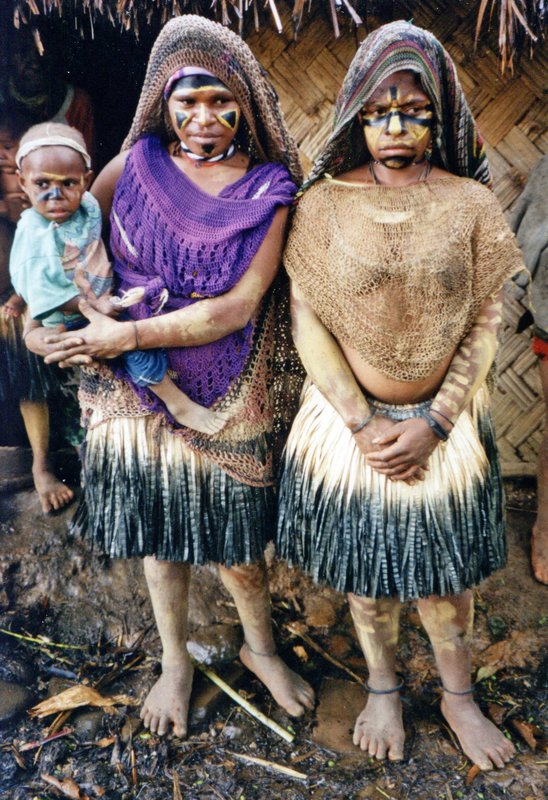 One of the reasons for us coming to Papua New Guinea is to see the Huli Wigmen, and today we have the opportunity. These are young men who have chosen to be removed from the normal society for a period of up to 18 months during which time they grow their hair into elaborate styles. The wigmen are accompanied by a guru whose purpose it is to ease the hair into the right shape as it grows, ensure only the right food is eaten and that the growing ‘wig’ is being raised from the mat at night so as not be ruined by the pressure. Once the hair has grown to the required length and has been shaped accordingly, it is carefully shaved off as one complete wig, and then either sold or hired out for special occasions. 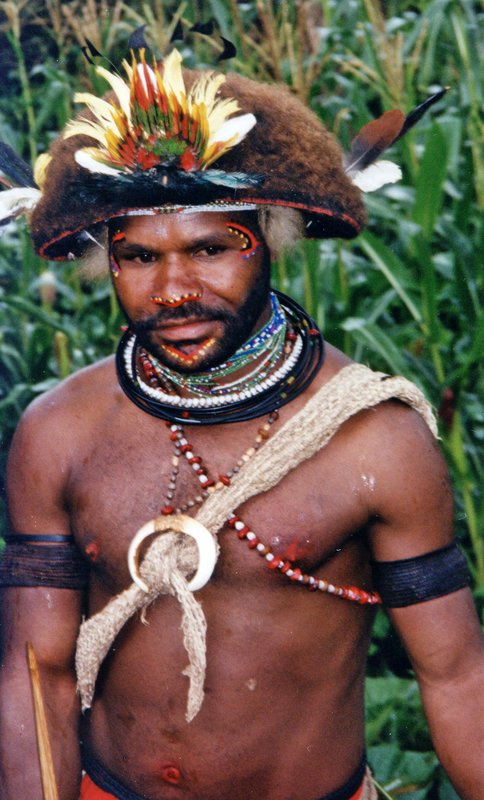 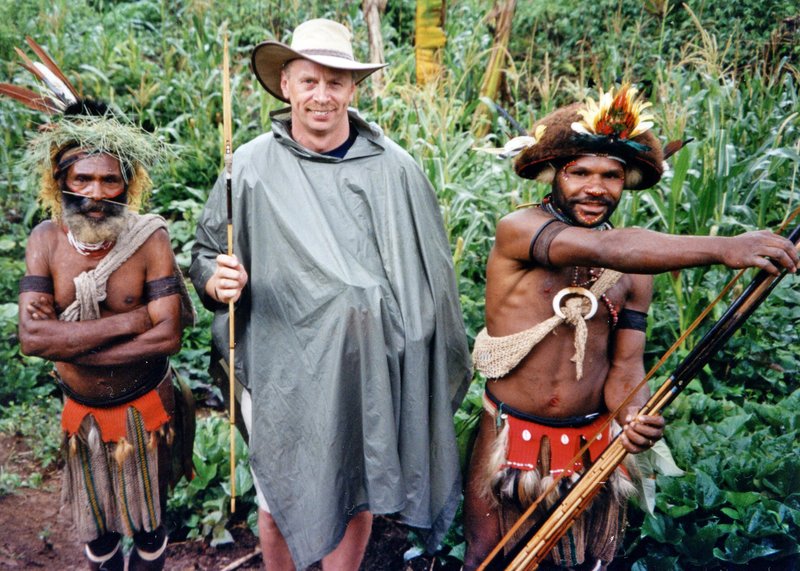 The wigmen live outside the main part of the village as it would be considered inauspicious for the growth of the hair for the men to be seen by the ladies of the village. As foreigners, Helen, Leoni and myself are considered honorary men, and therefore don’t count! Without telephones to contact the wigmen, Mark has to shout across the valley for them to meet us at an appropriate place. The Wigmen are very proud and keen to be photographed. We take their address to send the photos on. 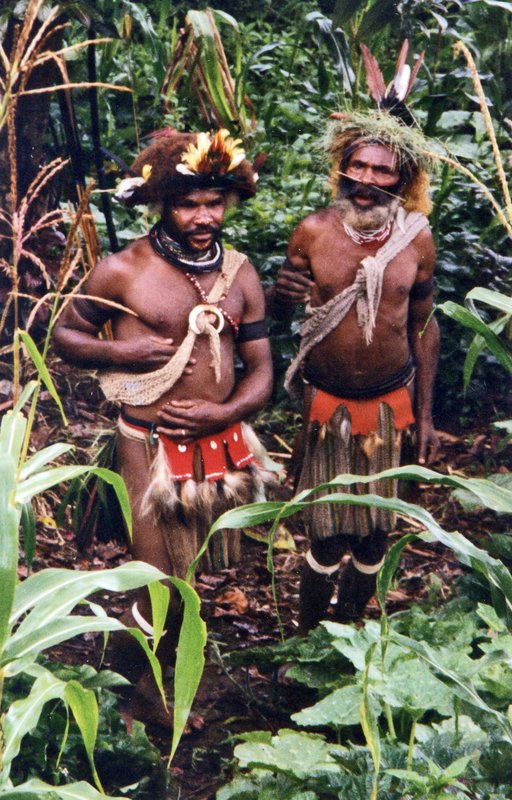 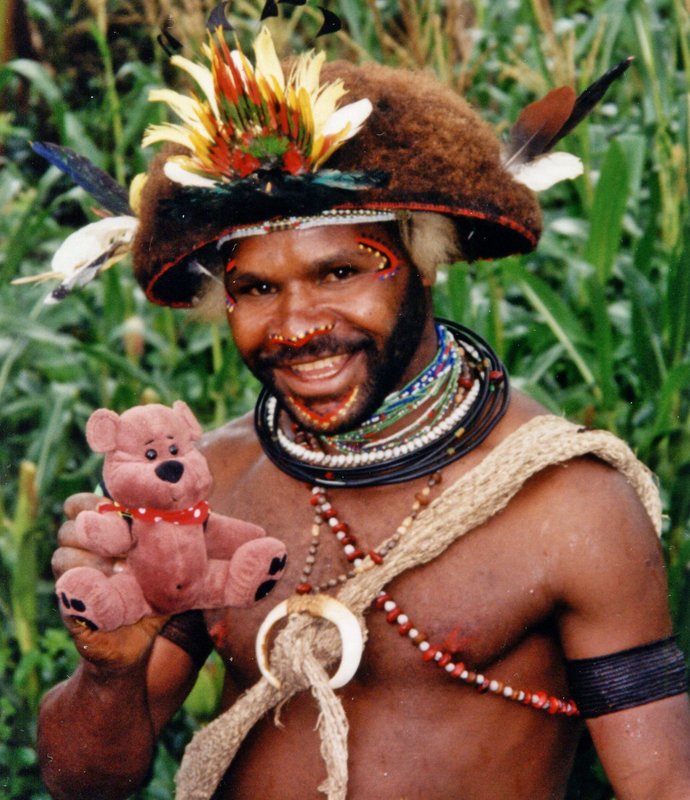 The walk from the village to reach the road is at best described as ‘interesting’. The 45° slope down to the river is mainly compacted mud, and even though Erewan tries to cut ‘steps’ in the mud with his machete, we slip and slide all over the place. It takes an absolute age to get us all down and then we have to cross a fast-flowing river by jumping from stone to stone. It’s a miracle that none of us ended up covered in mud or soaking wet. Mark has radioed ahead for the bus to pick us up; he has decided to cut our walk a little short today as the conditions are so treacherous.

We spend the rest of the afternoon relaxing in the room, indulging ourselves in the glorious view through the picture windows. At the customary pre-dinner drinks in the lounge, Mary-Jane joins us, commenting on how easy going and laid back the four of us are compared with her other guests. Dinner is good, wholesome food. I thoroughly enjoy the pumpkin soup, and take a large helping of delicious-looking golden roast potatoes to accompany the roast beef. How disappointing to find that they are not potatoes at all, but taro. They taste like cardboard and I struggle to swallow the first – and only – mouthful. I chew and chew and it feels like the taro is growing in my mouth. The feeling makes me heave, but I can’t spit it out in the paper napkin as they are starched linen! Eventually I manage to get it down, breathe a huge sigh of relief and take a large gulp of the wine to make up for it. They are running out of wine in the lodge, but Mark saved us a second bottle, whilst some of those awful Americans had to go without. What a shame.

Usually by 20:30 or 21:00 the bar is thinning out and most guests have gone to bed. This is not a place for nightlife! On our way back to the room, I accidentally step on a frog, which screams and jumps off into the night. I don’t know who was most taken aback, me or the frog! It’s a night for wildlife, as in the bathroom, we have a cicada which David nearly steps on. It screams too, jumps high and lands in the bin where it continues screaming. You wouldn’t think a small insect like that could make so much noise. It’s air-piercingly loud and goes on for a very long time. Eventually we put the bin outside the front door, I don’t want it to fly off and land on my face in the night. We can hear it for ages, still screaming inside the bin.