I feel pretty rough when I wake up this morning, I’m glad we are moving on today, as hiking would have been totally out of the question. We are travelling in one of the mini-buses with the Americans’ luggage to the airport this morning. The Americans themselves are following later in another bus. That suits us fine. We were initially booked on an Airlink flight later on this morning, but there has been some sort of mix-up, so Bob, the owner of Trans Niugini, is flying in with his little Baron six-seater aircraft to take us to Mount Hagen. 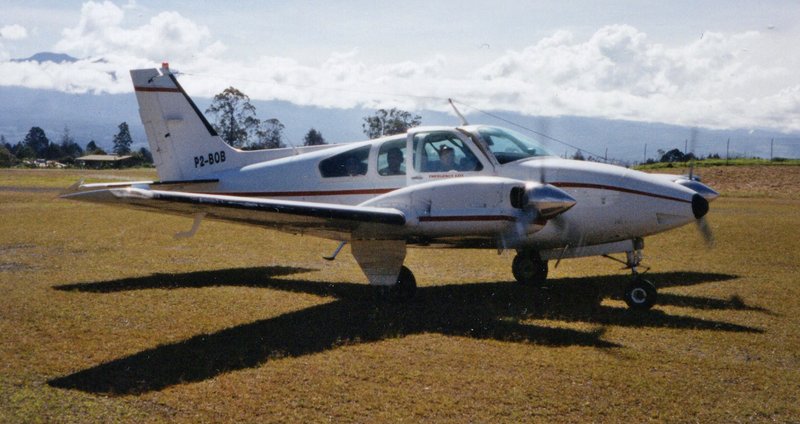 Getting to the airport is proving a little ominous though. During clan disturbances in the night, a bridge was burned on the main road, so we have to take a diversion through the outlying villages and some rather narrow, rudimentary tracks. Again we pick up a few police constables for protection during our journey. David and I are both enjoying the change of scenery and a different route, and view the whole thing as an adventure, but Peter is once more fearful for our safety. Obviously we are far too naïve to realise the dangers we are in.

At the airport, Peter is concerned when we meander around chatting to the locals, and makes us enter the locked and barbed wire protected airstrip enclosure until the plane arrives. 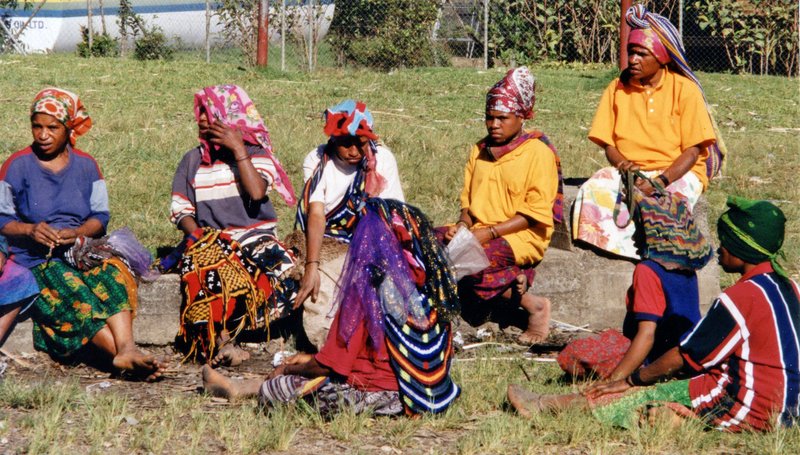 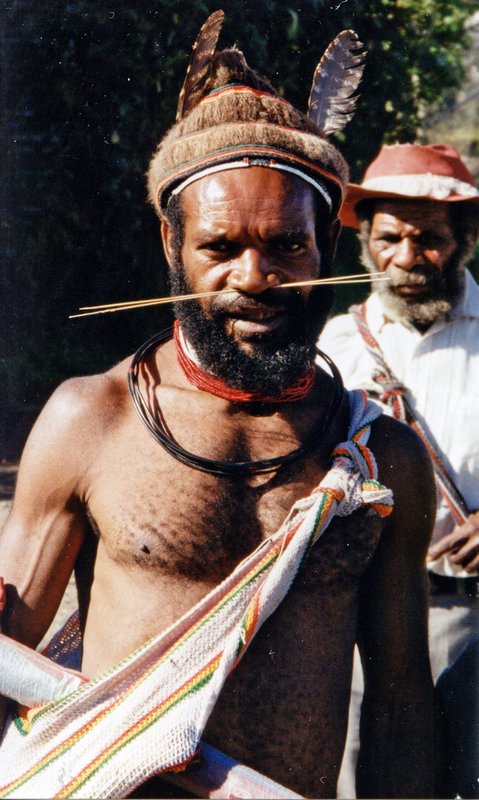 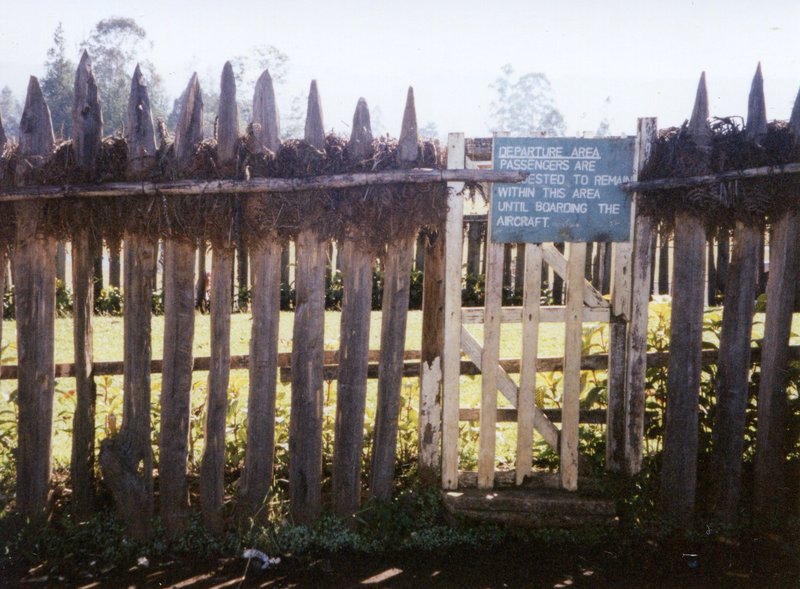 Getting into the plane alone is quite an escapade, we have to climb on top of the wing and crawl through a small door. David sits in the front with the video and the pilot while Miles and I have a seat each in the back. There is plenty of room with just the three of us. 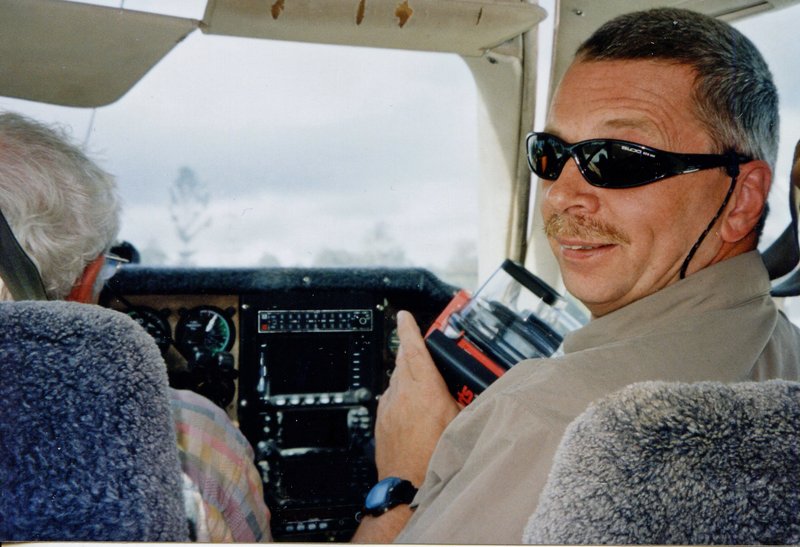 The flight is stunning. In Papua New Guinea all flying is done on a visual basis, in other words: if you can’t see the top of the mountains, you can’t fly over them. For that reason we fly just above the tree line and around the mountains whose tops are shrouded in cloud. It’s a very exciting flight. Just below us are swathes of virgin rain forest with undulating hills, dramatic cliffs and breathtaking waterfalls. At times the flight is bumpy, but always spectacular and very thrilling. 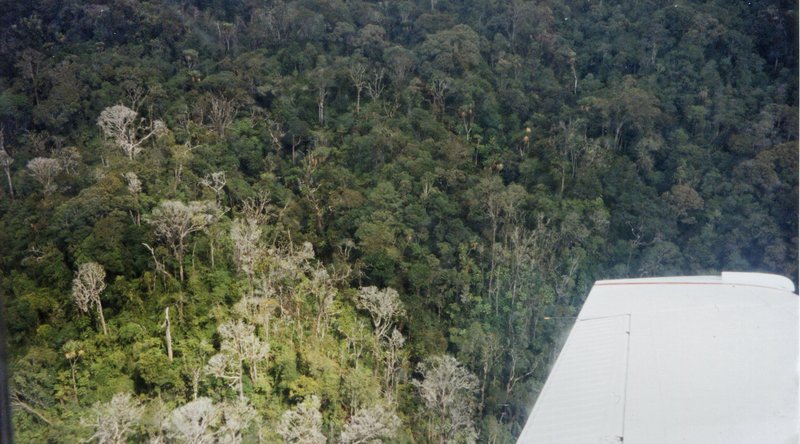 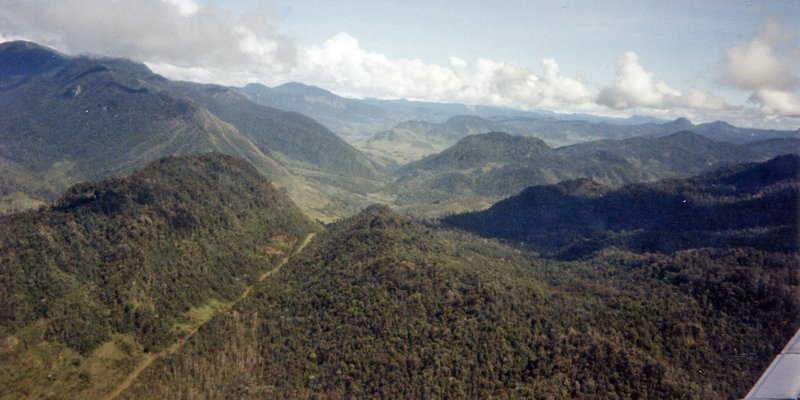 After about half an hour, we land at the much more modern strip at Mount Hagen. It’s almost a shock to get back to civilisation, I feel a little disenchanted and almost deprived to have been taken away from the primitiveness of the culture and the sizeable, undeveloped expanse of nature we have just come from. Mount Hagen is by no means an urban jungle, but they have all the modern comforts such as telephones, electricity, shops, roads and traffic. 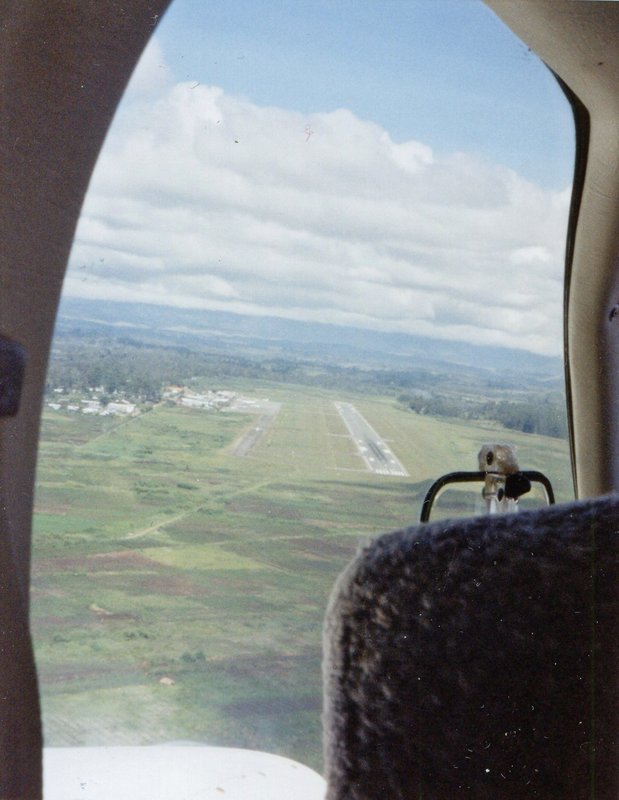 We are met by Mike who is taking us to Haus Poroman Office. We are confused – what is Haus Poroman and why are we going to their office? We are staying at the Highlander Hotel, which I believe is just a hop-and-a-skip from the airport. Has there been a change of plan? Nobody seems to know what is going on, but as far as they have been told, we are to be taken to the Haus Poroman Office and that’s what they will do. We just go with the flow, I’m sure we will find out what’s going on sooner or later. From the office we change vehicles to a Land Rover and head out of town. The roads are more as we know them from Tari, and one stretch is partly blocked by a land slide. Where are we going? This chap doesn’t seem to know any more than the others, he’s just been told to collect us. It appears we are staying at the Haus Poroman Lodge tonight rather than the Highlander Hotel, and when we arrive at the lodge we are absolutely delighted. What a super place. 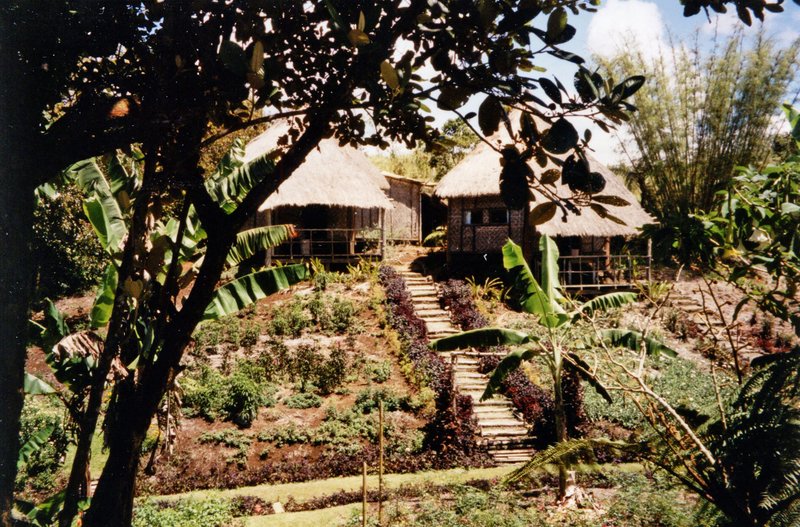 The main cottage houses the dining room, lounge, bar, gift shop and reception (all one room with an enormous fireplace in the middle) and the guest rooms are scattered around the rolling grounds of the hotel. Each room is a thatched, woven reed cottage on stilts with wonderful views of the valley. Every one has a little balcony and they are all set in beautiful flower-filled gardens with the most enormous trumpet-flowers I have ever seen. Lizards abound in the grounds and the room, so David is in his element. 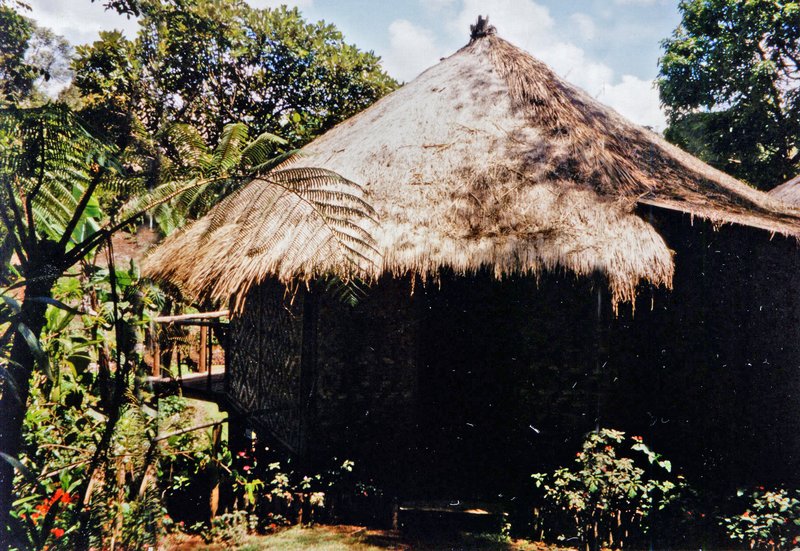 We enjoy a beer before ordering lunch from the menu (all the food is included). The dining table is a large slab of wood, very uneven and at an angle, but incredibly rustic and romantic. The stools are chunky logs, fun but not very comfortable. David chooses a toasted sandwich with chips while I have an omelette. 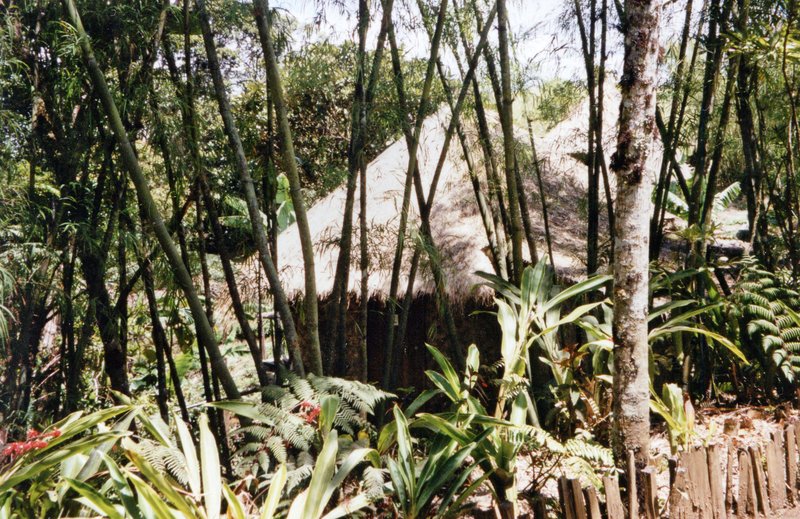 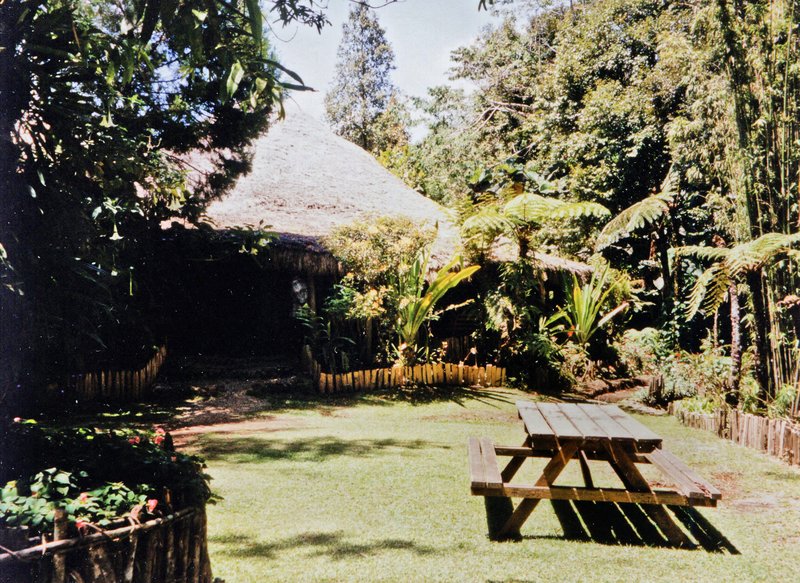 We decide to opt out of the afternoon walk planned for us, as I am suffering badly with my chest infection. It turns out to be a smart decision, not just because of my coughing fits, but David has a dreadful stomach upset and the weather turns to torrential rain later. We lounge on the bed listening to the magnificent peals of thunder, praising ourselves lucky that we are not half-way down some muddy slope at this moment in time.

We are both well enough to join the other guests for dinner. The other guests turn out to be one lone chap called Richard, a hospital worker from Australia in PNG on business. He is very odd, but fortunately he disappears straight after dinner. The food is very good indeed: more pumpkin soup, followed by Barramundi. Although I am not a great fish lover, I enjoy it very much. Dessert is fresh fruit salad and ice cream. As always when we go away, we are breaking many of the ‘rules’ set by the British Health Authority for travellers: Do not eat fruit you cannot peel, ice cream, ice in your drink, water from the tap etc… I live to regret it later, of course, spending most of the night running between the bed and the toilet. The night air is full of authentic jungle commotion: frogs clicking, cicadas screaming and other, bizarre and unrecognisable noises. What a wonderful place!