As expected, the hotel room was way too hot overnight (it is a common problem with Premier Inns) and I didn't sleep very well. The benefit of this is that I will then hopefully sleep on the plane, making the flight go quicker.

After dropping off the car at the valet parking, we head for the Titan check in desk. It is a number of years since we travelled on a charter flight, and I am concerned about my hand luggage which is full of camera equipment and borderline as far as the weight limit goes. To mitigate this, David is carrying one of my lenses in his backpack, and another in his coat pocket, whereas I slip all the batteries in my pocket and wear one of the cameras around my neck with yet another lens on it.

As it turns out, all this worry has been for nothing – they don't even give the hand luggage a second glance, yet alone weigh it. 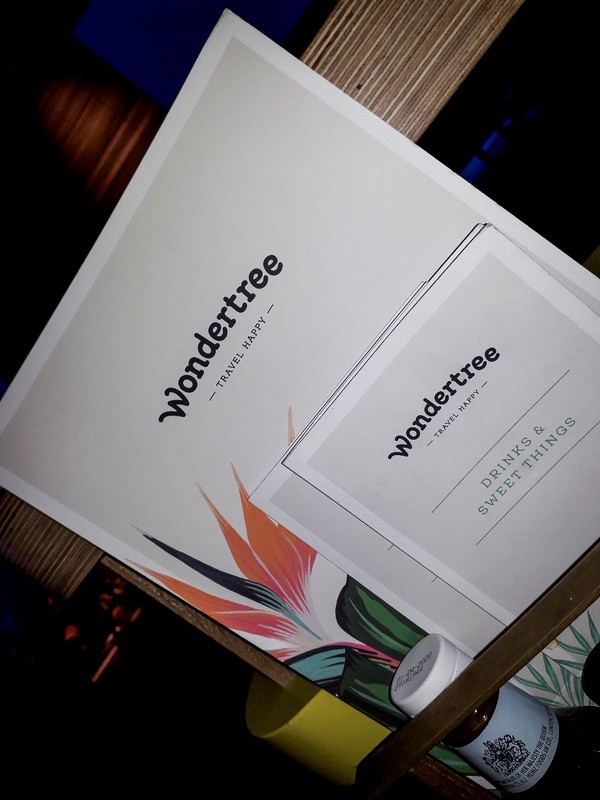 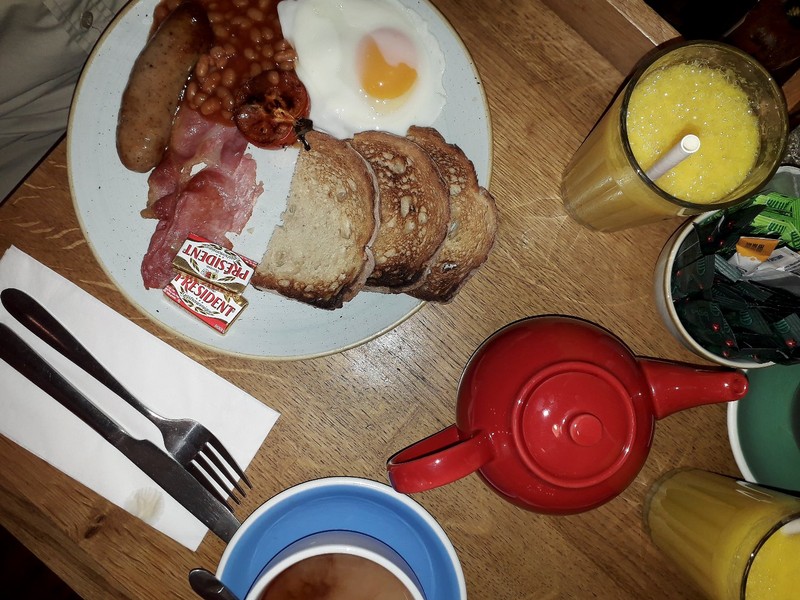 I order pancakes with bacon and syrup. 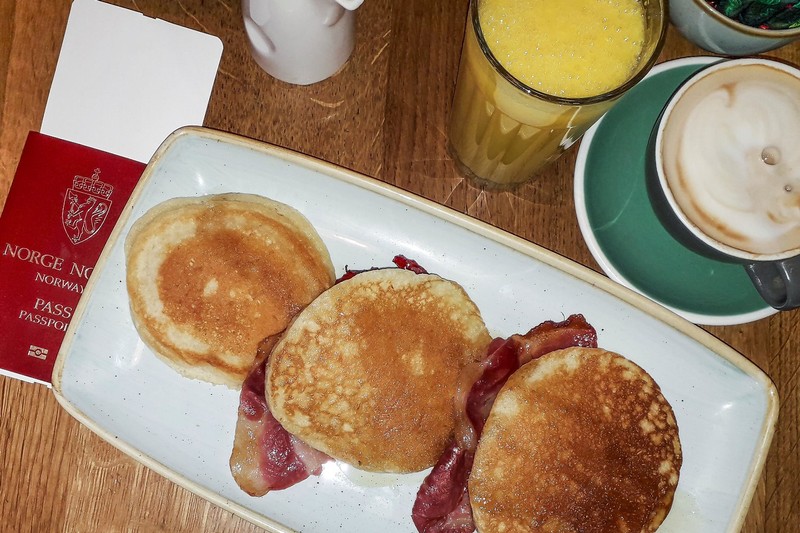 Boarding is simple and straight forward and we strike lucky with a row to ourselves. 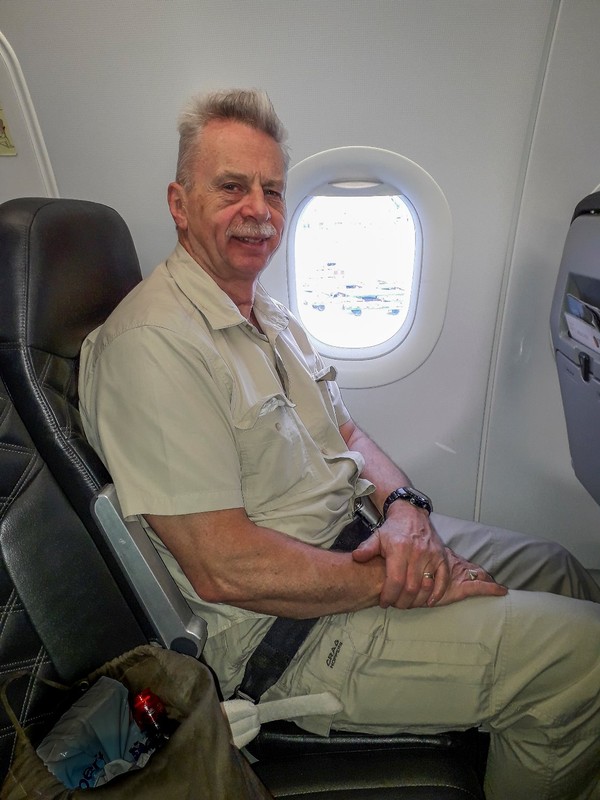 As we settle in, ready to relax for the next six-and-a-half hours, our hearts sink a little when the captain comes on the intercom with an announcement: “Things don't seem to be going too well for us this morning; we have developed a technical fault and have to go back to the stand to get an engineer to check it out.”

One hour later, he updates us: “We're ready to go, air traffic control is ready, but Eurocontrol is not ready”.

More time passes before the next announcement: “A restricted no-fly zone has cropped up in the south of France, so our flight path needs re-routing.”

That sorted, we are informed that “we need a courier to push us out from the stand and they are all at the other side of the airport”.

At this point the lady across the aisle from us becomes very irate, shouting obscenities, calling the captain a liar, refusing to switch her phone off etc. While I understand that nerves are getting frayed and tempers short, that sort of outburst is not doing her – or us – any favours.

We finally take off two hours and twenty minutes late. What should have been a 6 and a half hour flight, now becomes nearly nine hours of having to sit in this tin can.

The flight itself is reasonably painless after all that, with quite good food (spicy chicken noodles and a very nice chocolate and orange mousse). Wine, of course, has to be bought – and paid for – separately. I guess we have been spoilt over the years with scheduled long haul flight where everything is included.

The modern terminal building has been added since we were last here; in fact, it is not fully completed yet. We are last in the queue for immigration, but it doesn't matter as the luggage has only just started to arrive when we get out there.

Some things have never changed since we were here last, 23 years ago: porters wishing to change the British coins they have been given as tips into notes which they are then able to convert into Dalasi, the local currency. I am happy to oblige.

My bag arrives and we watch everyone else collect theirs, one after the other. Still no sign of David's. Some bags go round and round, again and again, but David's is not one of them. More and more people are leaving the baggage area and heading for the customs and exit. Still no sign of David's bag. With only a handful of passengers still remaining around the carousel, all apparently in possession of their luggage, the belt stops. Without David's case. After a few tense moments, I spot it, partly hidden by the curtain at the entrance to the belt, stopping just short of actually coming into the baggage area. Phew.

As expected, we have a private minibus transfer to the hotel. Our accommodation for the first five days is in a very small eco-lodge with just eight rooms, and it soon becomes apparent that we are the only tourists staying here for those nights. 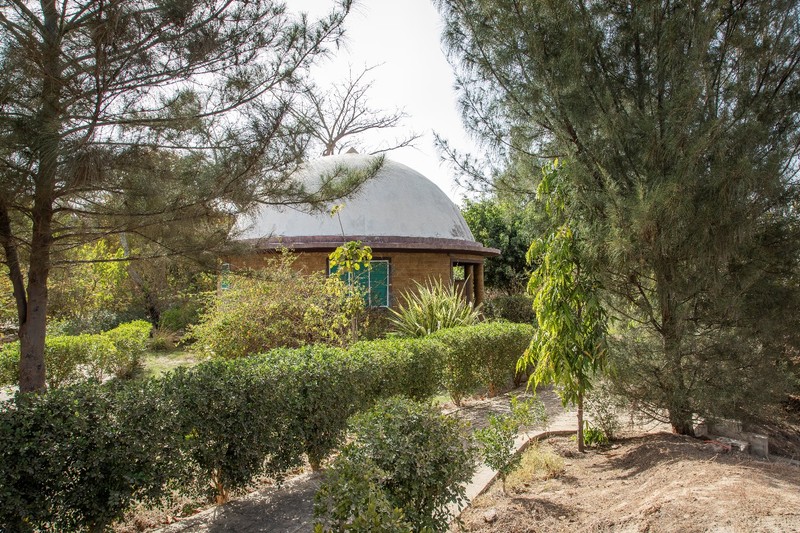 The lodge is all very open plan, with a thatch-covered bar and tables in amongst the trees as well as on a ridge overlooking the ocean for eating and drinking. 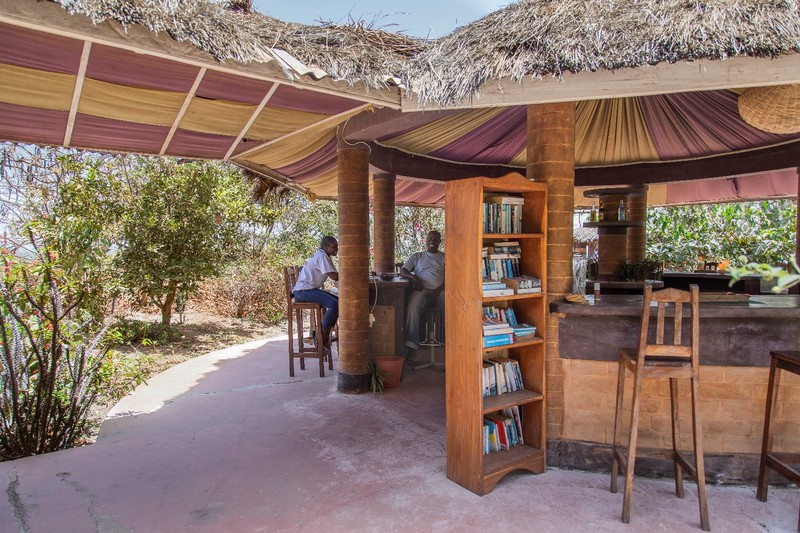 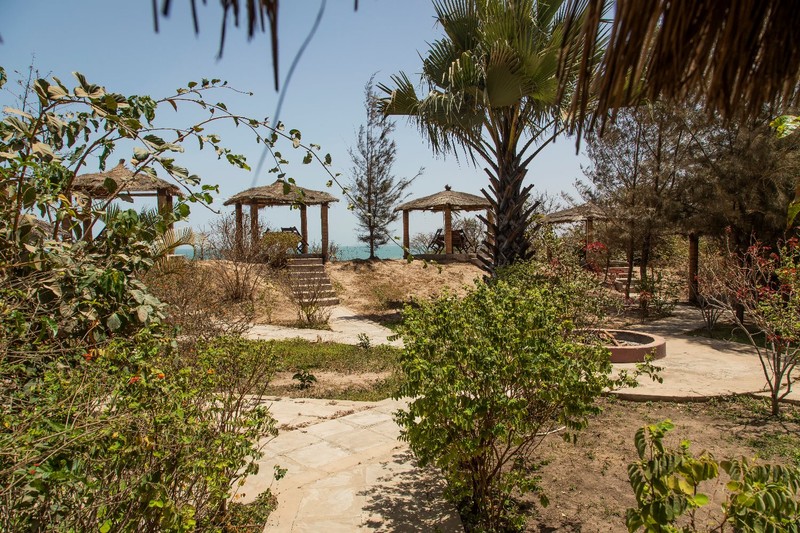 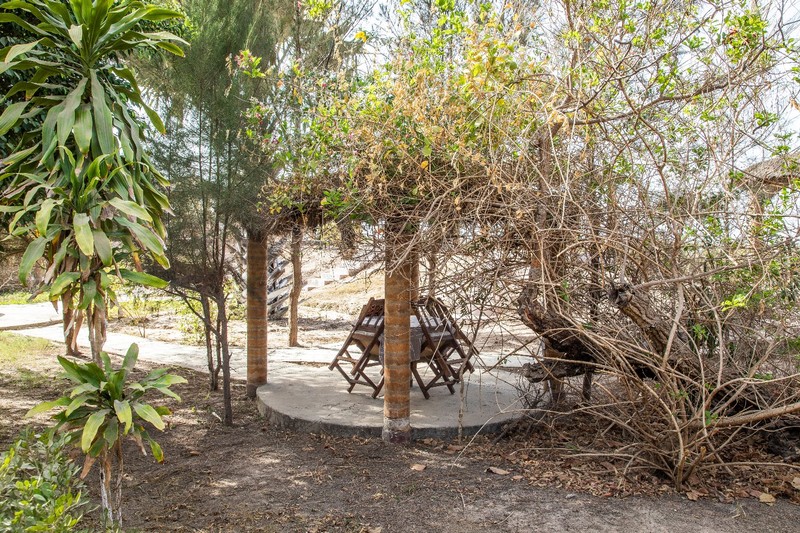 A meandering path leads us to the four simple brick huts housing two rooms in each. 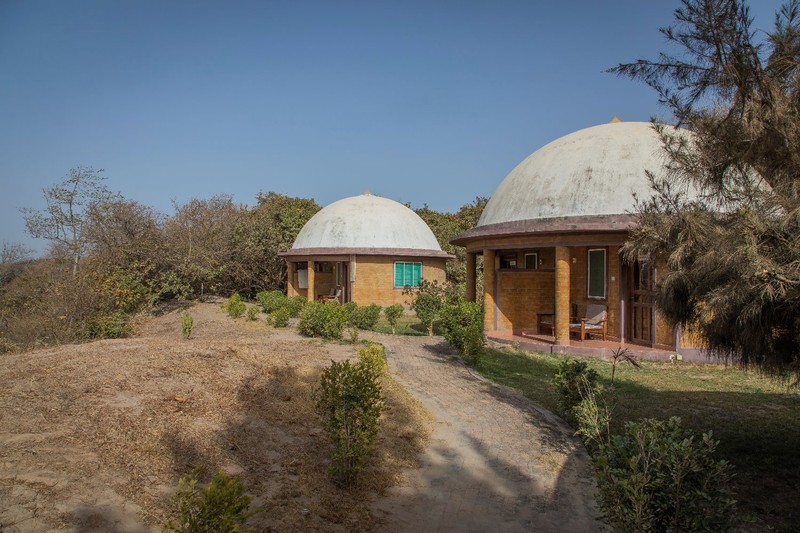 There is no A/C in the room, but it has been designed with a high domed ceiling to help disperse the heat, and with slatted windows, the sea breezes are allowed to flow through. 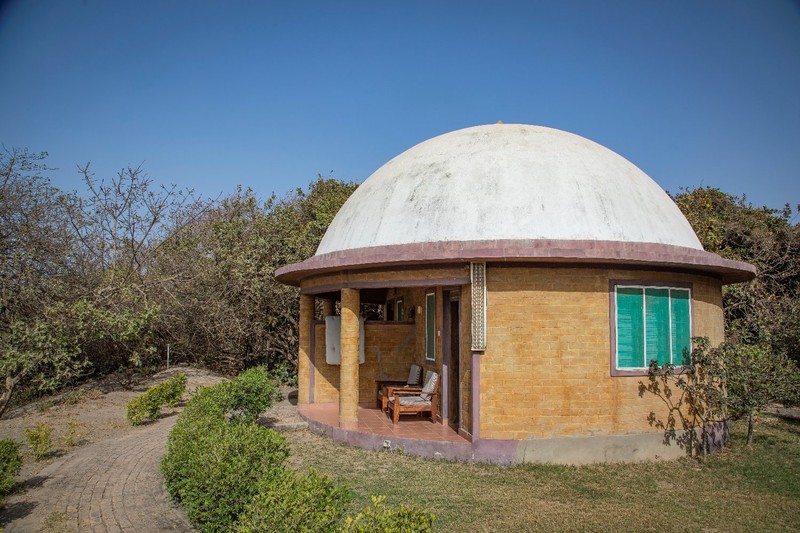 The inside is basic but adequate, featuring a narrow double bed which has been lovingly strewn with flower petals. In all the years we've travelled and all the hotels we've stayed in, this is a first for us. We have had petals on the bed before, of course, but never has it spelled out our name – such a special and personal touch. 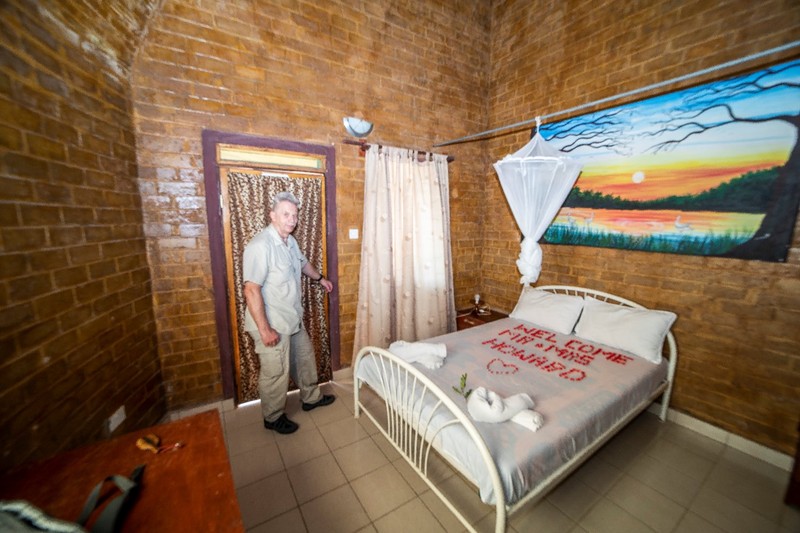 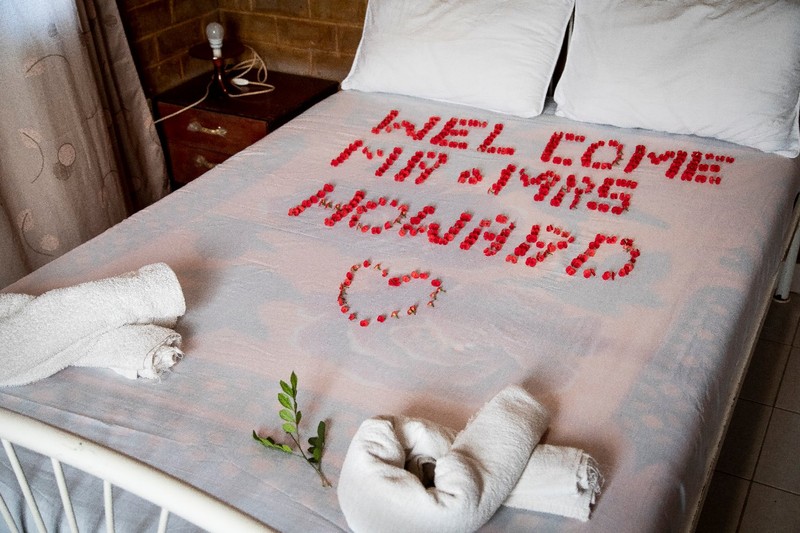 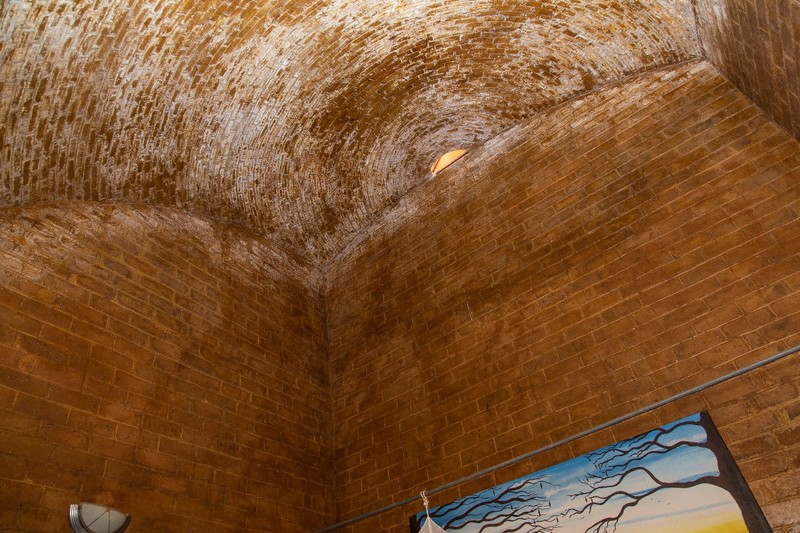 The bathroom has a shower and toilet but no running hot water (we were fully aware of that when we booked), and we cannot seem to manage to get any water out of the shower hose, only through the tap. Cold bucket showers it is then. In this heat, that can be quite refreshing, and is an excellent way to preserve water. 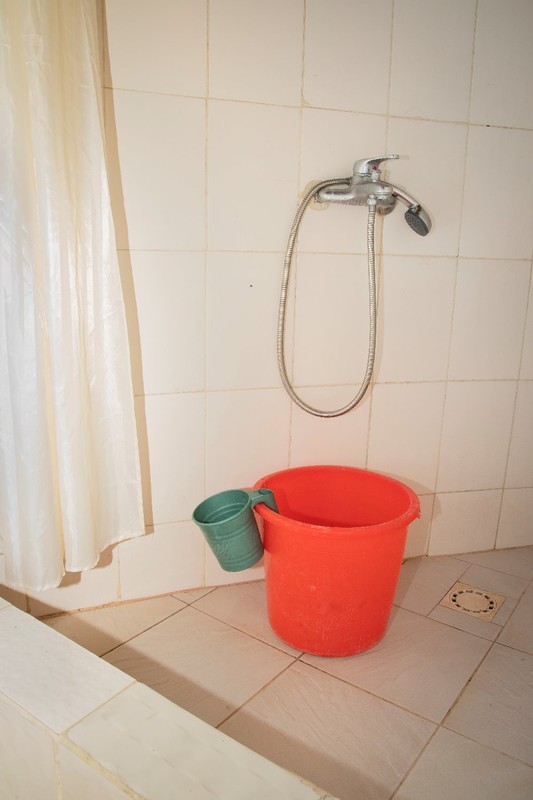 But first things first: bird watching. The lodge is set inside Tanji Bird Reserve, and have enticed birds to visit the grounds by providing a series of bowls and pools filled with water. To encourage human visitors, chairs and benches are available for us to sit on as we watch our feathered friends come to bathe and drink; with strategically placed tables for our drinks too of course. 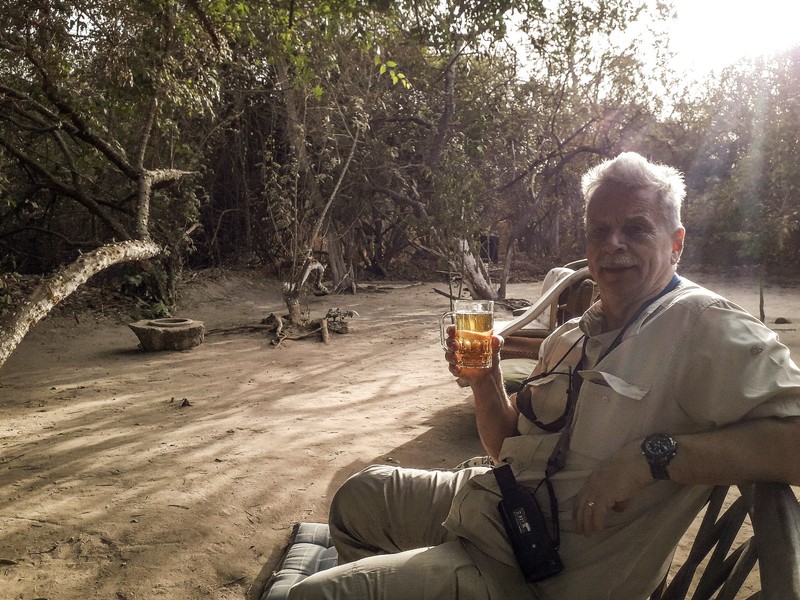 We see a surprising amount of birds in the short time we are here this afternoon (by the time we get settled in to the room, we only have around half an hour left of daylight). They come to bathe and drink, or maybe just hang around with their mates. Here is a small selection: 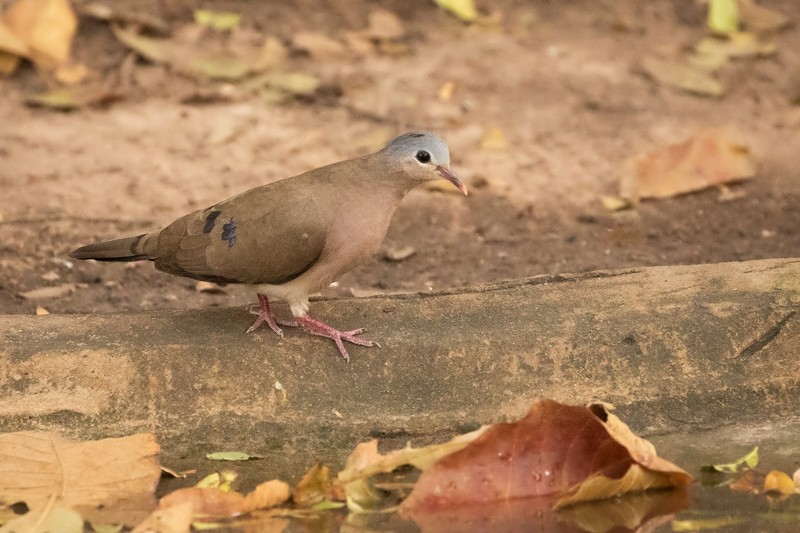 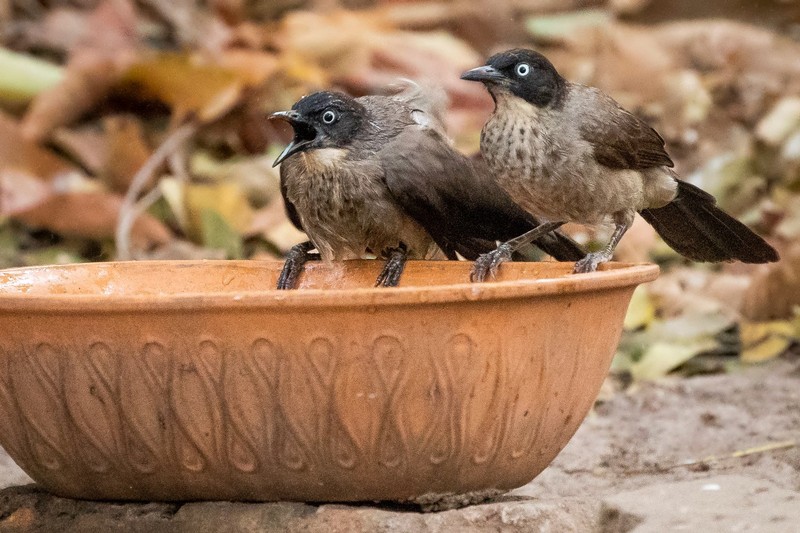 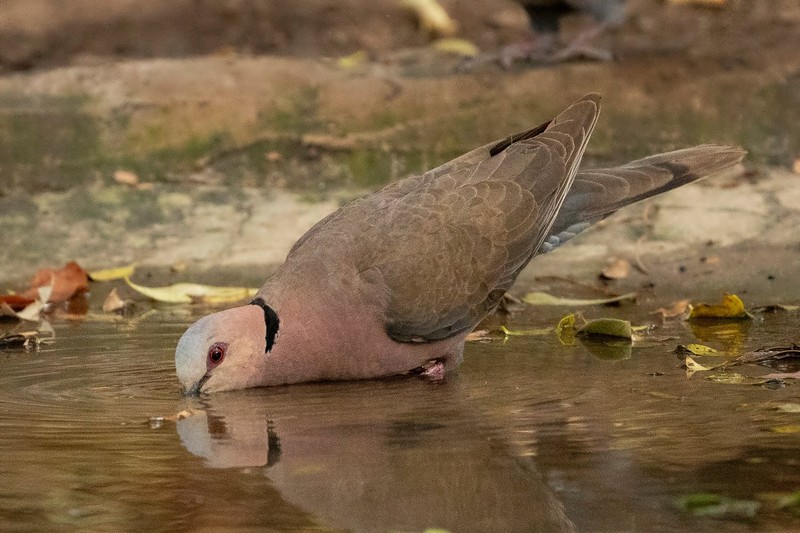 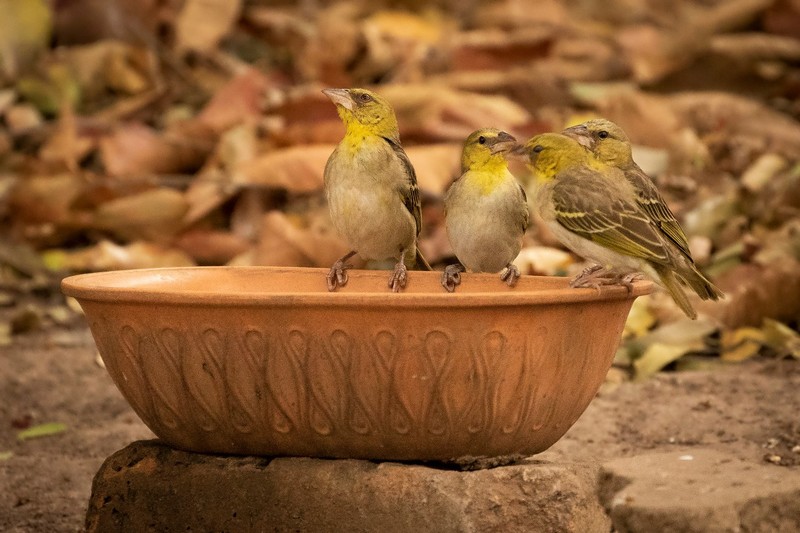 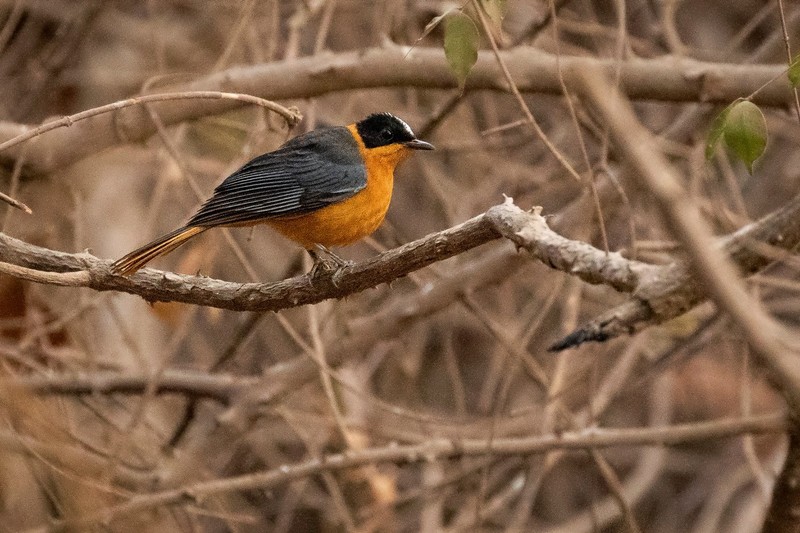 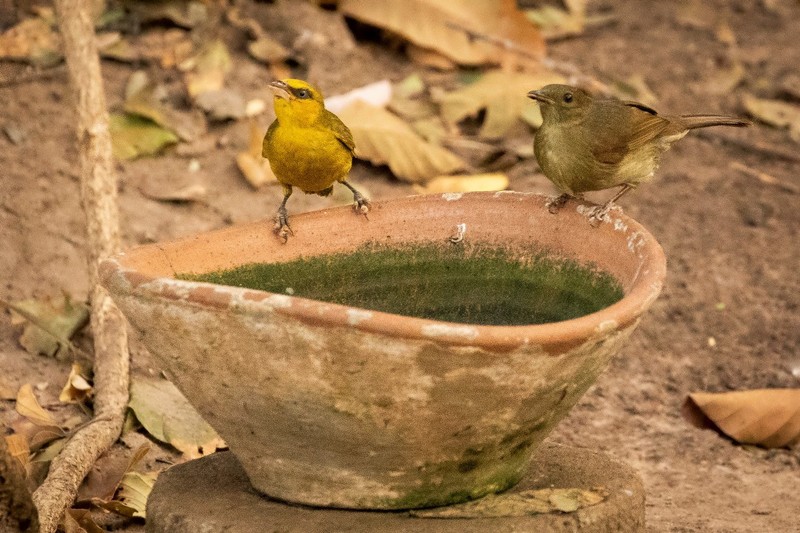 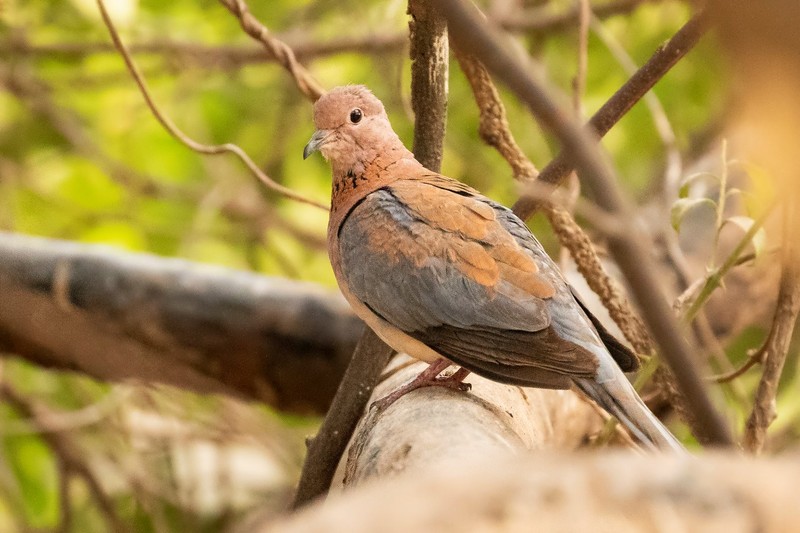 As is the Howard tradition, we enjoy a Duty Free tipple in the room before going down to the restaurant for dinner. We find it surprisingly chilly, with a cool wind, to the point of wearing a fleece. We never expected that in The Gambia; in fact, while packing we contemplated whether or not to bring any type of warm clothing at all. Just as well we did. 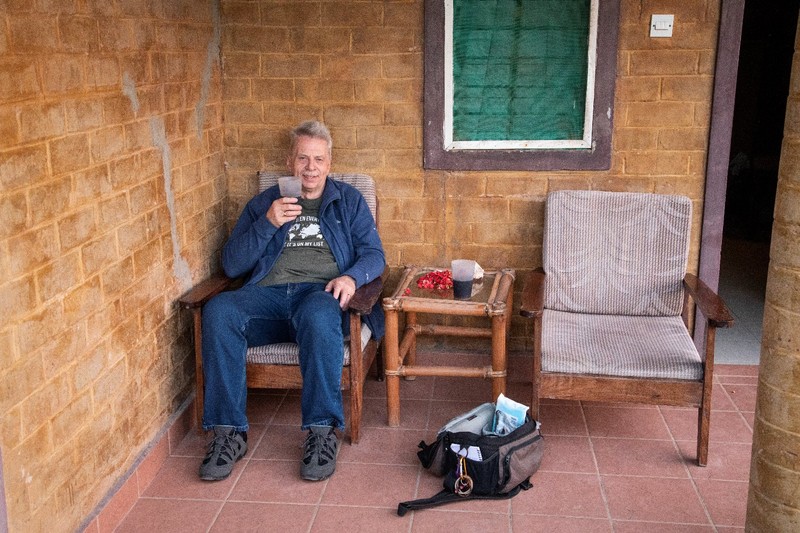 As the sun goes down, some interesting clouds appear, later taking on a muted pink hue from the setting sun. 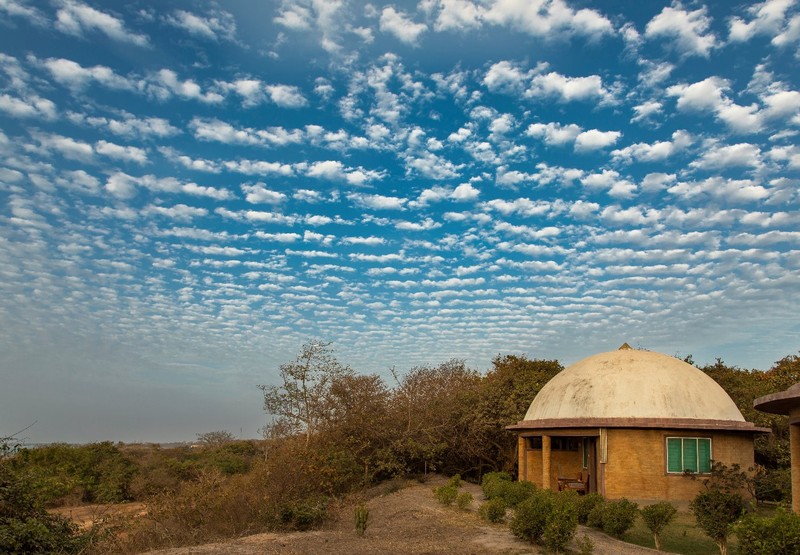 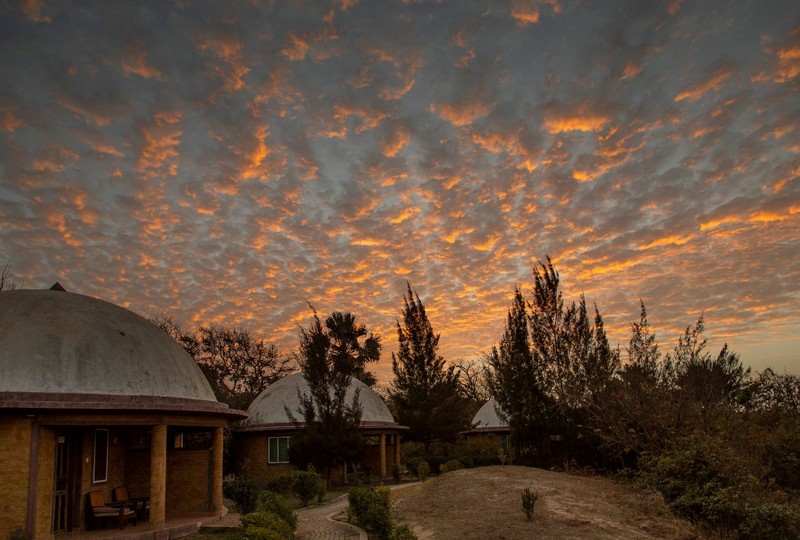 With us being the only two guests in the lodge this evening, catering is down to what they have in the kitchen, which is fish and chicken. 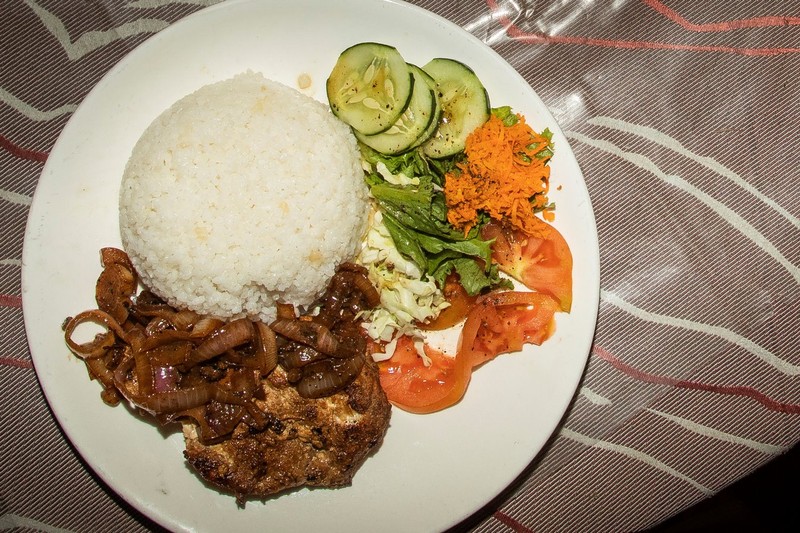 We choose butter fish, which is thankfully de-boned and absolutely delicious. I have mine with rice while David orders chips. 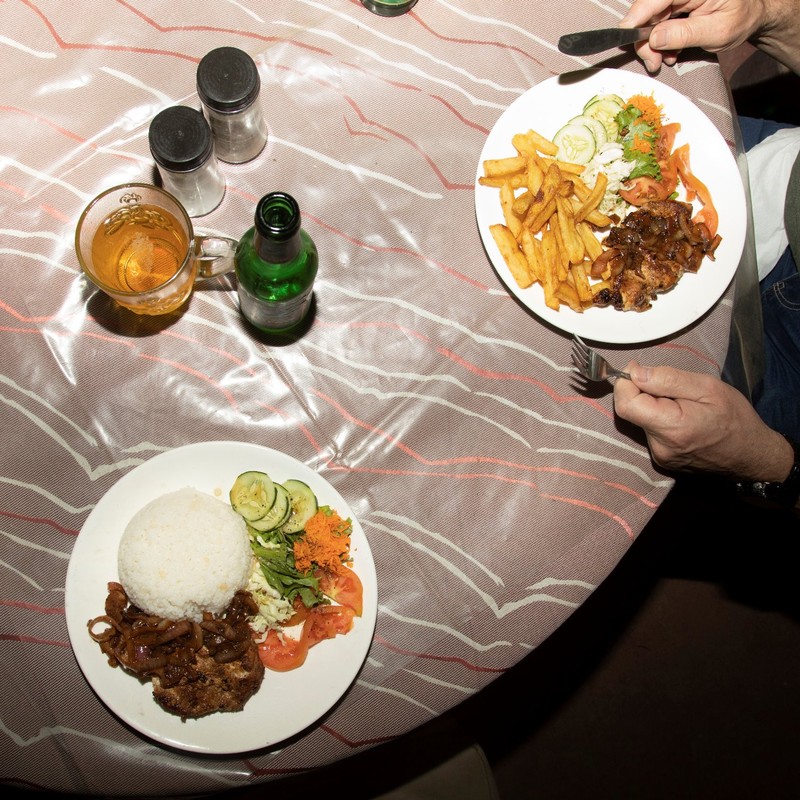 With a glass or two of the local beer, of course. While the main religion here in The Gambia is Islam, they are a secular nation and quite liberal – the country even has its own brewery. 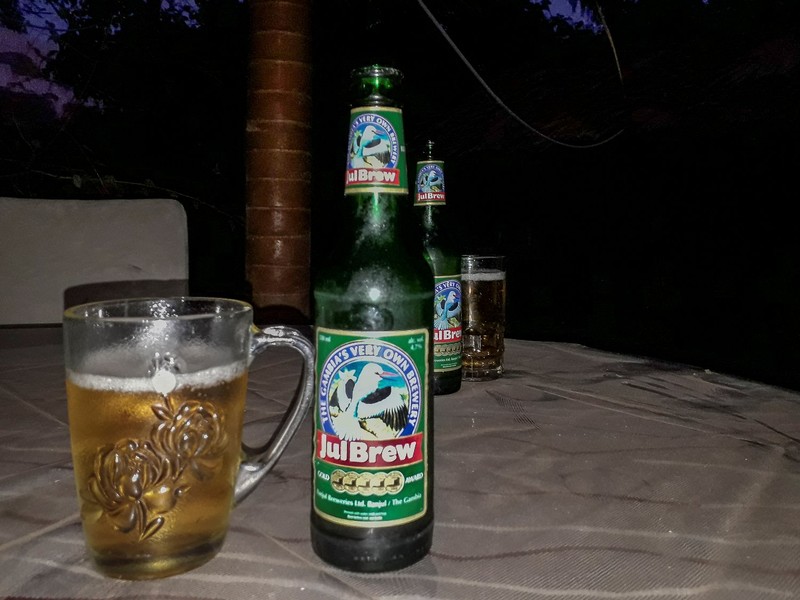 Being situated inside a bird reserve, there is no light pollution here. Walking back to the room in almost complete darkness, we are glad to see someone has been to the room and switched our outside light on while we were eating dinner. How thoughtful.

We have only had a couple of beers each this evening, but David really struggles to get the key in the lock. s we are fiddling, a knock from behind the door makes me jump – there is someone in our room! Then it dawns on us: this is not our room. It seems we have tried to enter the room where the manager was sleeping. Oops. Sheepishly we continue to our own room and make a mental note of leaving the outside light on tomorrow night.

Being used to a super-king sized bed at home, we worry that the four-foot bed in this place is going to feel rather cramped. Surprisingly, it doesn't, but it is somewhat chilly this evening so we reluctantly grab the duvet from the cupboard and put on the bed. While the bed is narrow, the duvet is miniscule. It is basically a single quilt inside a double cover. It looks like we will have to cuddle up all night, then.

Once the lights are out, the room is pitch black. The sort of blackness that you cannot imagine without having experienced somewhere with absolutely no light whatsoever. Your eyes never get used to it. You cannot see anything. At all. I make sure my torch is within groping distance, and drift off to sleep.

A shame about the delay on the flight

But Tanji looks wonderful in a low-key fashion and has immediately gone on my list of possibilities for if we return to Gambia one day! The names on the bed reminded me of our stay at Xugana Lodge in Botswana last year - while we never got our names, we did have a sweet message each day and beautifully decorated beds. It seemed a shame to disturb the designs in order to go to sleep

Thanks Todd and Sarah for commenting.

I would love to return to Tanji one day. Despite how much more basic it was than the other two lodges we stayed in, it remained our favourite.

Fabulous trip minus the Aircraft snag ! The First time I saw a hotel welcoming their guests with Rose Petal in the bed .